A little after Some Guy Who Kills People, I was right back in the same seat for a flick called Midnight Son. 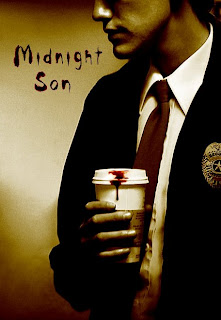 Midnight Son tells the story of Jacob (Zak Kilberg), a man dealing with vampirism in modern day Los Angeles.
Man, Toronto After Dark is really on a roll with indie character pieces this year, as Midnight Son is an extremely refreshing take on the vampire genre. By avoiding grandiose conventions and taking a more biological approach to the lore, director Scott Leberecht effectively grounds the piece in reality. In the following Q&A, he said that was wholly intentional.
“I wanted to take out all the silliness and just keep the two things that would make living as a vampire difficult – having to drink blood and an aversion to sunlight.” 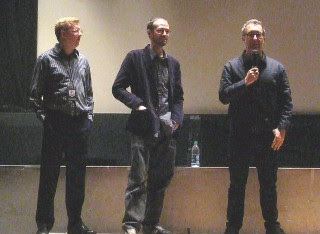 Producer Matt Compton, actor Zak Kilberg & director Scott Leberecht.
Also, by stripping away a lot of the fanfare, Leberecht could concentrate on the more intimate details. Granted, the easy metaphors of body transformation and drug addiction are present, but I think the movie goes a little deeper than that. It is equal parts connection and isolation, escalation and acceptance. However, the main reason Midnight Son succeeds – as was the case with the aforementioned Some Guy Who Kills People – is because of its lead. Kilberg offers up a fine performance and is well backed up by the striking Maya Parish, as Mary, and the sleazy Jo D. Jonz, as Jacob's 'dealer', Marcus. The latter was a nice addition, as it provided that extra bit of conflict needed for the movie to ascend to the next level.
One thing I found a little curious was that it appeared to be a period piece. References to VHS and America’s Funniest Home Videos suggested that the film was set in the nineties, but an explanation as to why this might be the case was never proffered. Perhaps it was just Leberecht (who also wrote the film) returning to a significant time period in his life, much like Richard Kelly did with his debut masterpiece, Donnie Darko. 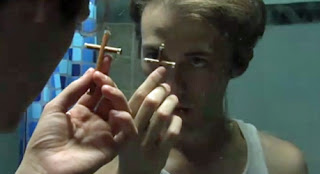 I really have to congratulate the filmmakers for mining new material from a tired subgenre. It turns out that Leberecht was just another filmmaker that got frustrated with a system that wasn’t making the movies he wanted to see, so he decided to do one himself. The result is a shining example that brooding character pieces can work if they are well written and have some sort of arc. Oh, it doesn't hurt if your actors have the chops, as well.
Posted by Jay Clarke at 12:32 PM