After French director Xavier Gens burst onto the scene in 2007 with Frontiers, it seemed like, for him, the sky was the limit. But after his subsequently unfortunate brush with Hollywood, horror fans have eagerly awaited his bounce back project, which this year came in the form of a post apocalyptic film called The Divide. 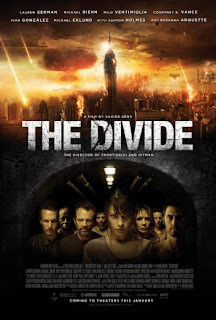 When New York is hit by a nuclear attack, nine residents of an apartment complex escape into the bowels of an underground bunker. As time passes and their supplies dwindle, they begin to turn on each other.
The Divide is one of those movies that you don't really enjoy, as much as you do endure. It was pretty ugly stuff, held together by strong performances. Genre icon Michael Biehn eschewed bitter rage through a half-smoked cigar as building superintendant Mickey, and Lauren German had a thousand-yard stare that completely captivated me. I'd almost forgotten that she was one of the few bright spots of Hostel Part II. Milo Ventimiglia was boldly cast against type and completely lost himself in the role of Josh, as did Michael Eklund, who played his compatriot Bobby. 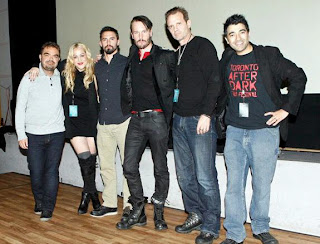 Director Xavier Gens, actors Jennifer Blanc, Ventimiglia, Eklund, Biehn & Festival director Adam Lopez.
I did find The Divide’s setup a little clunky though. I would have preferred it be more like The Mist, where we get some time with the characters before it all goes to hell, but it hit its stride soon enough. It also took an unexpected turn early on, that I would’ve liked explored a little more, as well. There is no knocking the effects though, which are quite visceral and well executed, including a refreshingly CG-free body burn.
Some may argue that the escalation of violence in The Divide is a tad far-fetched. I wish I could agree, but I'm not that optimistic. We've seen on several occasions what can happen when people are confined and society's rules are taken away. It is a sad truth that Gens was not afraid to shine a light on. Under his darkly poetic eye, his fully committed cast brought forth a grim and entirely possible scenario.