Last year, I started hearing about a real-time, one continuous shot horror flick from South America called The Silent House. The format certainly piqued my interest – and how often do you get to see a Uruguayan genre effort? – so when it dropped on DVD a few weeks ago, I sought it out with On The Shelf in mind. 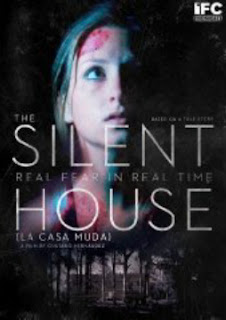 House cleaners Laura (Florencia Colucci) and her father (Gustavo Alonso) stay the night at an old estate and soon suspect that they may not be alone.
The Silent House is an impressive technical achievement. It is one thing to shoot a movie in continuous real time, but another thing entirely to not distract your audience while doing it. I thought, for the most part, the transitions were really well done here. On top of that though, the film just has a great look to it, using all of the creepy house’s real estate – including the sprawling grounds around it – to full effect. It had several excellent setups, many of which involved mirrors, and a few inspired scare moments.
Due to its structure, the story within The Silent House was fairly uncomplicated with little dialogue among its three characters. Lead actress Colucci carried the movie flawlessly, to the point where I often felt like I was skulking around the old house with her. Thankfully, her behaviour was fairly unmovie-like. When she realized she was in danger, the first thing she did was block the door and grab a weapon. Hey, what a novel concept! I’d say the only thing The Silent House didn’t have was a particularly satisfying ending, but it was what it was. It is definitely worth a watch, should it ever pop up on Netflix. 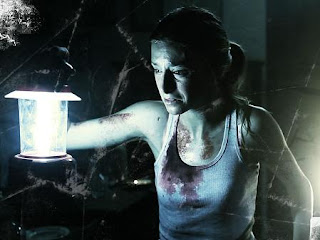 As is the case with most foreign genre properties these days, The Silent House’s remake rights were immediately snatched up when it played Cannes last year. This is of consequence to me because the man tapped to direct this version is Chris “Open Water” Kentis. I’ve been waiting seven years for this guy to get back behind the camera, and you have to admit that this is a project perfectly suited for his talents.
Posted by Jay Clarke at 7:46 AM