The Power Of Christ Compels You! 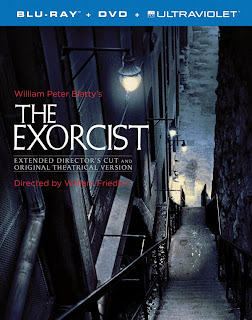 Though this not the first release of this film on Blu-ray, it is certainly the most comprehensive to date and I'm absolutely chuffed to sing its praises here. I need not prattle on about the film itself, as we all know of its greatness. It is a cinematic touchstone rarely matched by any other, genre or not, and the performances by Blair and company are the stuff of legend. I would rather like to talk about how this high-definition transfer and supplemental materials enhance the experience of this groundbreaking film.

Often when re-watching films on Blu-ray, it allows for a new level of visual detail and The Exorcist is no different. The format beautifully lends itself to director Bill Friedkin's wonderful knack for composition. For all of his exteriors, in Iraq and Washington D.C, there is always so much going on in the frame, and now we can see it all in breathtaking clarity. The makeup design by the legendary Dick Smith are still among the best ever filmed. Linda Blair's demon makeup is iconic, and there's a reason that I grew up thinking Max Von Sydow was thirty years older than he actually was.

There are two new featurettes on this 40th Anniversary Edition. The first is Beyond Comprehension: William Peter Blatty's The Exorcist, where the original author (as well as screenwriter and producer) returns to where it all began, the guest house in Encino, California where he wrote the novel. He tells of his experiences writing the book and collaborating with Friedkin, while visiting locations from the film in Georgetown. The second is called Talk of the Devil, includes an interview with Father Eugene Gallagher who performed the 1949 exorcism for which Blatty based his novel. It is some chilling stuff that really adds context to the novel and subsequently the film.

There's a lot of really great stuff included in this set, right down to the presentation of the fantastic new cover art and a nice hardcover excerpt from the director's memoir, The Friedkin Connection. I think the numerous featurettes in this set only increased my already lofty respect for the filmmakers. The amount of technical prowess that was involved in achieving the nightmarish things that happen as a result of Regan's possession is mind blowing. Nowadays, all of this would be done in post, but the fact the production was forced to shoot everything in camera due to necessity, only enhances the realism. The cast had to act in a room that was chilled to below zero temperatures, and be thrown around a set that was hooked to hydraulics. Blair and Burstyn got the worst of it, being pushed and pulled by wires and rigs caused all manner of bumps and bruises during production.


There are several very intriguing conversation points brought up in the supplemental materials. There's the assertion that the procedures used to diagnose Regan's condition are as traumatic and shocking as the possession itself. Then there is the constant dialogue between Friedkin & Blatty about which version of the film is superior – it was a disagreement that caused a rift between the two friends for many years. However, hearing them talk, you can see they have an immeasurable amount of respect for each other.

“I felt in many ways when I made the film, like a landscape painter, and I was very conscious of approaching The Exorcist film in that way, with a kind of painter's eye. All of which was provided for by Blatty and his screenplay. I mean, I didn't invent any of this, but he had given me a road map and a place in which to make shots like this. And when I saw it, it took my breath away.” -William Friedkin.

Then, of course, there is the oft-talked subject of the curse that supposedly plagued the production. However, perhaps most interesting to me is Friedkin, Blatty & Blair's assertion was that The Exorcist is not a horror film. I can certainly agree that there is much more going on this film that just cheap shock and awe, but there can no doubt that a great deal of the subject matter is utterly horrifying. It is a film about faith. It is a thriller. But there's no reason to look upon the word “horror” as a dirty word. There are so few films that can illicit the reaction that The Exorcist did, and still does today. Wear it proudly I say. 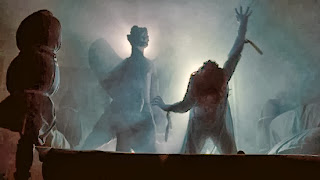 The set also includes three commentaries, both versions of the film, the BBC's 1998 25th Annivesary doc The Fear of God, sketches & storyboards, trailers – including my favourite “flash image” one – TV and radio spots. It is pretty much everything your inner demon could want.


This October, own the 40th Anniversary Edition of The Exorcist on Blu-ray. Add it to your Halloween viewing list, so you can once again marvel at one of the genre's greatest achievements.
Posted by Jay Clarke at 10:00 AM