I was able to check out some local flavour at Toronto After Dark on Sunday, with Tricia Lee’s film Silent Retreat. 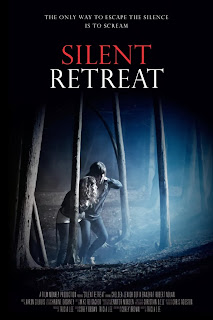 Janey (Chelsea Jenish) is sent to a rehabilitation center where no talking or communication with the other residents is allowed at any time. She soon discovers that there may be something more sinister afoot involving the retreat's overseer The Doctor (Robert Nolan) and also the surrounding woods.

I was pleasantly surprised by this film. The concept - of being isolated and surrounded by danger, but not able to talk to anyone around you - was definitely the film’s strongest attribute. The film featured several scenes without dialogue and I thought it broke up the narrative nicely. This device would have never worked however, without good performances and Silent Retreat has several of them. Jenish and Sofia Banzhaf, as Alexis, both gave heartfelt performances, showing off strength and vulnerability in equal measure. Indie horror veteran Robert Nolan also notches another devilish performance as The Doctor.

Silent Retreat was proof that solid acting, a great locale and a good setup can go a long way, as the third act does have its share of problems. There were some character decisions that seemed a little extreme and there is an argument to be made that the film needed the creature in the woods. The nefarious deeds of the Doctor and his two sons were nefarious enough on their own, without adding this extra element. I do understand that the creature facilitated the film's thematic cycle that you'll either buy or you won't, so it was really just a choice.

I had heard negative things about the final reveal of said creature, but I was all right with it. I've been involved in a lot of low budget productions and I can appreciate their approach. Though not particularly elaborate or original, I'd certainly take what Silent Retreat offered over CGI any day of the week. The rest of the gore effects were well executed, and having worked with Shaun Hunter on a few occasions, I know from experience that he can do a lot with very little.

Silent Retreat has its flaws, but there is enough good here to warrant a watch. Lee already has several projects under her belt and is quickly emerging as another strong female voice in genre filmmaking.
Posted by Jay Clarke at 10:00 AM