On Thursday, Toronto After Dark screened a pair of new found footage flicks. The first was Bobcat Goldthwait's Willow Creek. 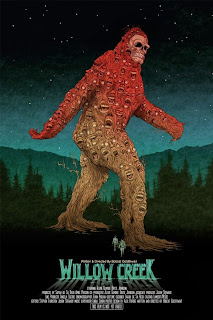 Kelly & Jim (Alexie Gilmore & Bryce Johnson) venture into the woods near Willow Creek, California in search of the legendary Bigfoot.

For a guy with a predominantly comedic background, I think Goldthwait took a pretty good stab at the horror genre here. He kept things very simple, using The Blair Witch Project and the films of Joe Swanberg as his two main inspirations. During the Q&A, Goldthwait mentioned that he originally wanted to do a Christopher Guest-style comedy with the Bigfoot legend, but after visiting Willow Creek and mixing with the locals, he felt that taking the piss out of them would be disingenuous.

Speaking of the town, I think the biggest surprise for me was that it was an actual place. I was aware of the Patterson-Gimlin footage, but not that the area where it was filmed had now become a tourist attraction. In terms of communities that have made an urban legend a legitimate source of income, Willow Creek ranks up there with Roswell, New Mexico. This works in the movie's favour as it makes the setup fairly fascinating to watch, especially since it is perhaps a little longer than it needed to be.

So, once into the meat of the picture, there were one or two legitimately creepy scenes, the most significant being a prolonged night sequence inside a tent. Goldthwait, again using the Blair Witch template, basically put his actors in a situation and fucked with them at night. I have to say the results were pretty organic. Gilmore & Johnson had good chemistry and considering most of the movie is just them, their relationship felt pretty natural. The conclusion of Willow Creek was fairly logical, even if I did feel it lacked the exclamation point that would've pushed it from the realm of good to great.

Over the years, there have been so few genuinely good Bigfoot flicks, but this one was pretty solid. It delved into the lore, and delivered some prolonged tension. It was almost as if this subgenre needed an outsider to come in to do it properly.

The second of the pair that night was a film called The Banshee Chapter. 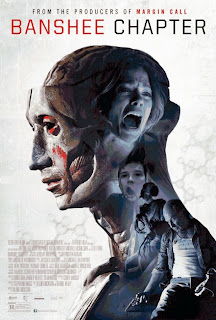 A journalist (Katia Winter) investigating the mysterious disappearance of an old friend discovers it may be linked to a government conspiracy involving an experimental drug and radio transmissions of unknown origin.

I knew next to nothing about this film going in, but the subject matter certainly had me intrigued. A friend of mine had turned me onto the whole “number stations” phenomena about a year ago, and my only knowledge of MK Ultra was that it served as the inspiration for Stephen King's novel, Firestarter. In the end, I was almost shocked by how much I enjoyed it.

There were some really effective set pieces in this movie. While it is true the core of The Banshee Chapter is basically an elaborate parade of jump scares, they are really well executed ones. It is hard to keep an audience on edge constantly, but I think the audience was caught a little off guard by how unsettling it was. There were a few areas where director Blair Erickson was able to take things to the next level. The addition of the Lovecraftian angle was a welcome decision, and it was also a very smart choice to use a mix of found footage and conventional narrative. By using the former for just the flashback sequences, it cut out the usual “why are they still filming?” distractions that are usually associated with the format.

As one would expect, sound plays a huge part in The Banshee Chapter. The “transmissions” are very creepy and perhaps most unsettling is that all of them were taken from existing number station recordings. I'd say the real highlight of the film though, is Ted Levine who plays an eccentric Hunter S. Thompson type character named Thomas Blackburn. I feel Levine is a very underutilized character actor it was nice to see him given free reign here. It was delight to watch and added some much needed comic relief to the pervasive doom and gloom of the picture.

The market has been flooded with this type of film over the past few years, but The Banshee Chapter is probably one of the strongest I've seen. I imagine this is in no small due to the fact that a lot of it is based on fact and not manufactured.
Posted by Jay Clarke at 6:00 PM