So, it's the calm before the storm here at The Horror Section. Not only is Toronto After Dark almost upon us, right ahead of the usual insanity of Halloween, but I also have a sizable announcement to make this Friday involving a little project of mine.


In the meantime though, chew on these little morsels of horror goodness!


My friend Nate directed me to a series of old ghost tales called Scary Stories To Tell In The Dark the other day. Written by Alvin Schwartz in the eighties, they contained many classic campfire stories and urban legends. Intended for younger audiences, there were three books in the series and immediately caused controversy in the United States due to their sometimes graphic nature and creepy illustrations from Stephen Gammell. I soon discovered that audio recordings of these books are available on YouTube.


I love these. From the way they are written, it is obvious that they were meant to be read aloud around a campfire or to a child tucked in bed. Classic stuff.


What's scarier than the iconic poster for Steven Spielberg's Jaws? The motion poster for Jaws! Click on the image below to see it in all its glory via GeekNation. 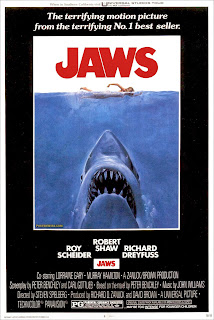 
This one's a few weeks old, but I wanted to throw it up here anyway. The indie rock band Franz Ferdinand's new video Evil Eye is chock full of B-movie references to the work of Lucio Fulci, H.G. Lewis & Jörg Buttgereit, among others. Have a gander below.