Last week, I ventured out into the cold to take in Rue Morgue’s first Cinemacabre of 2013. They were screening a movie called Would You Rather, which I had only just heard about a few weeks before. 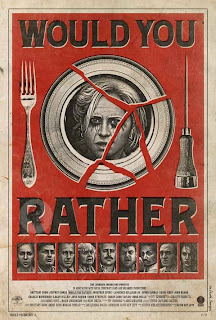 In need of money to care for her sick brother, Iris (Britanny Snow) attends a dinner party thrown by wealthy philanthropist Shepard Lambrick (Jeffrey Combs). Unfortunately for her and the seven other guests, Lambrick has cooked up an evening they won’t soon forget – or perhaps even survive.

Would You Rather is not a bad little film. Taken from conception to release in less than two years, director David Guy Levy keeps things simple. Shot largely in one location, this dialogue driven piece of flamboyant nastiness is a good example of doing a lot with a little. It has a speedy setup, gets right into the meat quickly and is one of those movies that gets better as it goes along. This could’ve easily been a trite exercise in torture porn, but succeeds by not being excessive nor overly convoluted, things for which that subgenre have always been guilty. 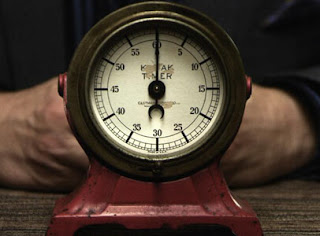 Would You Rather features a ton of familiar faces, including Robb Wells, John Heard and Sasha Grey, but the movie shines, perhaps unsurprisingly, due to genre veteran Jeffrey Combs. He is fantastic in this, truly relishing the role as sadistic aristocrat Lambrick. I can’t recall him being this good since The Frighteners nearly twenty years ago. I also have to give Levy – as well as writer Steffen Schlachtenhaufen – props on the ending, as well. Following all the diabolical events that transpired, coming up with a fitting ending could’ve been tricky, but I felt there was something darkly poetic about its conclusion.

During the Q&A via Skype with Levy after the screening, someone brought up if the film was a comment on the – to use the now tired phrase – “one percenters” and their perceived sense of entitlement. Levy replied that he could see that, but his real intent was to combine his fascinations with the secret societies glimpsed in films like Eyes Wide Shut, and infamous human behaviour studies, such as the Stanford prison and Milgram experiments.

I took a gamble on this one, and came out pleasantly surprised. Armed with a juicy idea and the considerable talents of Jeffrey Combs, Levy just let human behaviour take its course.
Posted by Jay Clarke at 10:00 AM

Definitely checking this out.