The next title I checked out from the Time Out Best 100 List was Ingmar Bergman’s 1968 film Hour of the Wolf. 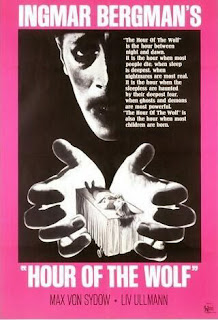 I’m getting down to the final few titles now and judging by what I have remaining, this process may also act as an informal film school.

Before all the bells and whistles of today, Bergman and filmmakers of his era were of a different breed, using the tools of narrative and inference like master craftsmen. In Hour of the Wolf, Bergman employs an even keel of dread throughout, thus amplifying the effect when he throws something abstract into the mix. I was especially caught off guard at the film's rather abrupt conclusion. It was only on my second viewing, and again hearing some of those early conversations between Johan & Alma, that things became clear. This is one of the strengths of this film, as Bergman is not concerned about spelling out what is and isn't real. He merely tells the story via Ullman's character and leaves it up to you to interpret it however you like. I found the underlying theme of infectious psychosis really intriguing, and surprisingly unique.

I also find Hour of the Wolf fascinating because it falls in a time period where I can see films from which Bergman drew inspiration, as well as ones that were later influenced by him. Even though my knowledge of pre-sixties horror films is limited, I can see that Bergman’s visual palette may have been drawn from European silent era pictures like Nosferatu and The Cabinet of Dr. Caligari. I also thought there might have been a whiff of Herk Harvey's Carnival of Souls, but I know not whether Bergman would’ve ever seen that film prior to 1968.

On the flip side, it seems to me that Hour of the Wolf would have been the kind of thing that a young David Lynch would have eaten up. That strange and foreboding conversation between Alma and the old lady with the hat early on in the movie is exactly the kind of exchange we’ve been seeing in Lynch’s work for decades. And that's not even mentioning his penchant for protagonist insanity and symbolism.

Moving on from that, I was impressed with the naturalistic performances. After growing up seeing Max Von Sydow in countless films - The Exorcist, Dreamscape, Strange Brew and Dune just to name a few – it was cool to see him in one of his earlier roles. Although, even here he still looked like an older gentleman, which makes me wonder if he was ever young. Ullman is also great and reminded me a little of Jessica Chastain, but that could very well have been due to me seeing three of her films that same week.

So, for excelling in simplistic storytelling alone, I can see why Hour of the Wolf is on the list. When you add in the great cast and the dreary look of the film, you have yourself something that really sticks to your bones.
Posted by Jay Clarke at 10:00 AM