Trailer Tuesdays: Alone In The Dark

This week's trailer is Alone In The Dark. Not to be confused with Uwe Boll's cinematic abortion, this 1982 slasher was directed by Jack Sholder (of The Hidden and A Nightmare on Elm Street 2 fame).


A few things come to mind while watching this trailer. First, if we were giving out awards for “worst babysitter ever”, I'm sure this girl would be a nominee. Second, I have to say I'm surprised that this film isn't more well known, considering it has not one, not two, but three horror heavyweights in it. Plus Murdoch from TV's The A-Team!


It's been a very long time since I've seen this movie, but there are still a few bits that stick in my head, including the sex scene glimpsed in the trailer, as well as a pivotal scene with a character named Bleeder. He is significant because he dons a hockey mask during the film, much like Jason Voorhees did in Friday the 13th Part III. 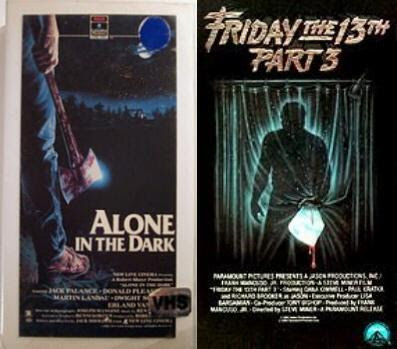 Funny thing is these two movies were both released within a few months of each other, so it is highly unlikely one knew about the other. I guess it's just one of those things.
Posted by Jay Clarke at 10:00 AM