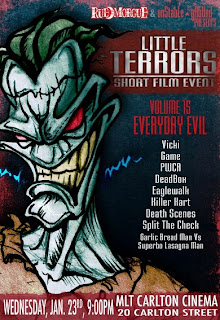 As always, it was a strong programme. Apart from the usual contigent of shorts previously screened at Toronto After Dark last October – including the Christine-inspired Vicki, Game from Nova Scotia, and my buddy Darryl Shaw's weird-ass effort, Garlic Bread Man vs Superbo Lasagna Man – there were several premieres, as well.

I liked the wonderfully simple and analogue nature of Richard Karpala's DeadBox, even if it was clear to me about halfway through where it was going to end up. Hey, better to do that in a short, rather than a ninety-minute feature, right? 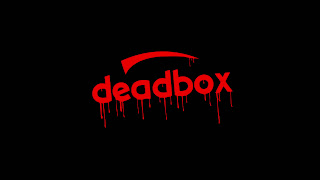 The British short Death Scenes from Joel Morgan packed a lot into its seven-minute running time, with its cool little self contained mystery and solid payoff. Check it out below

EagleWalk was one of the few over twenty-minute that actually justifies its running time. When it was finished, I felt like I'd watched a full length creature feature, with all the extraneous stuff taken out. I was also quite refreshing to see someone tackle Bigfoot, as you don't really see that much these days. You can check out the entire short below.

My favourite short of the night was J Feeney's Killer Kart. Ever since I saw Intruder in my teens, I've always found supermarkets such interesting settings for horror flicks. I found the caliber of acting here above par, especially considering this was film was done while Feeney was in film school. He's definitely a talent I'll be keeping my eye on. From the trailer below, you can see where his influences lie.