A new year is upon us, and with it brings a new crop of horror flicks to look forward to. Here’s what’s on my radar for 2013.

World War Z (Jun 20th)
All concerns and grievances aside, I can’t help but be excited for the world’s first zombie blockbuster to hit screens. The CG-laden trailer does recall I Am Legend, but I still remain optimistic. The original wonder script by J. Michael Straczynski has since been retooled to beyond recognizable, but at least it looks like the The Battle of Yonkers remained intact. Mainly, I just hope director Marc Forster has learned how to shoot an action scene since Quantum of Solace.

Hansel & Gretel: Witch Hunters (Jan 25)
Even after failed attempts at fractured fairy tales like Red Riding Hood, Brothers Grimm and Van Helsing, I'm still looking forward to this one. I know the odds are stacked against it, but call it a guilty pleasure. I had a smile on my face through most of this trailer and it seems everyone on board knows what kind of project they are making here. Tommy “Dead Snow” Wirkola has a great sense of humour, and I'm hoping it carries over here. At the very least, action veterans Jeremy Renner & Gemma Arterton will likely make a kick-ass team.

Nurse 3D (TBD)
I was expecting this to hit last year, so again I reiterate, look at this poster!!! 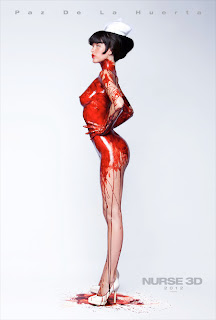 Mama (Jan 18th)
Guillermo del Toro has a good track record playing sire to new talent, but I hope this one is more The Orphanage and less Don’t Be Afraid of the Dark. I’ve been deliberately avoiding the trailer on this one, but  I do know the cast is great and the byline promising.

S-VHS (TBD)
A follow-up to last year’s analog horror anthology V/H/S, this year’s roster of filmmakers includes the likes of Jason Eisener (Hobo With A Shotgun), Eduardo Sanchez (Lovely Molly) and Simon Barrett (writer of You’re Next). It is premiering at Sundance in a few weeks, so I’m sure I’ll be seeing it here sometime in the fall.

Stoker (Mar 1)
Chan-wook Park, the director of the infamous Vengeance Trilogy is back with his first English language picture. As you would expect, it looks exquisite and is sure to include several deliciously grim twists and turns. Also, in my opinion, the only thing better than Nicole Kidman, is evil Nicole Kidman.

Horns (TBD)
Following in his father’s footsteps, writer Joe Hill sees his first project adapted for the big screen. Daniel Radcliffe stars in a story about a man who suddenly sprouts some pointy appendages following the death of his girlfriend. I enjoyed Piranha 3D as much as the next guy, but I am glad to see director Alex Aja return to his more sinister disposition.

There are of course no shortage of sequels in the pipeline, but based on past successes I am mildly interested in The Last Exorcism 2 and Insidious 2. And it goes without saying I am onboard for another go-round with everyone’s favourite killer doll in Curse of Chucky.

As far as remakes go, Carrie and Maniac show some promise, as does Jim Mickle’s redo of the Mexican cannibal flick We Are What We Are. More importantly though, I’ve decided to throw caution to the wind and just jump into this Evil Dead movie with both stumps. 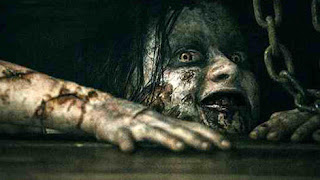 Five films that I have seen that should hopefully be enjoying theatrical releases this year are You’re Next, Byzantium, Resolution, The Lords of Salem and Here Comes The Devil. All have my seal of approval, so be sure to catch them if they hit a theatre near you.

Lastly, I hear that Richard Raaphorst's undead Nazi opus Frankenstein’s Army is near to seeing the light of day. Apparently, a finished product has been seen by a chosen few. Hopefully, the almost ten-year wait (this is the project that the online sensation Worst Case Scenario eventually became) will be worth it.

Okay, here's to horror’s best and brightest came bring it this year!
Posted by Jay Clarke at 10:05 AM

Have you heard of a film called Warm Bodies?

As a matter of fact, yes. I was going to put it on the list... and then I watched the trailer. Doesn't really look like my bag.

Actually, scratch that. I just realized that Bodies is from the director of Mandy Lane. Maybe I'll check it out after all.