A movie I'd been looking forward to for a while – especially since Paramount pushed back its release a full year – was Tommy Wirkola's Hansel & Gretel: Witch Hunters. 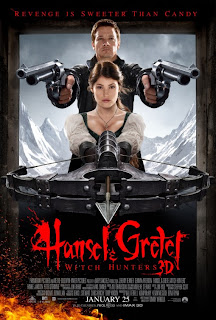 All grown up after their childhood encounter with an evil witch, Hansel (Jeremy Renner) & Gretel (Gemma Arterton) now hunt them for a living as bounty hunters.

I could tell from the trailers that this was likely going to be my bag, but I ended up enjoying Witch Hunters more than I was expecting. Wirkola (of Dead Snow fame) was clearly using Army of Darkness as a template, even so much as to make the opening baddie – the infamous gingerbread house witch – look decidedly Candarian in appearance. Though not as flamboyant as Raimi, many of the movie's action set pieces are seeded with his brand of splatstick.

This attitude is perfectly complimented by the two leads, Renner and Arterton. Since neither are strangers to big budget action, they looked completely at home in these highly physical roles. I was also taken with Renner's love interest Mina, played by Finnish actress Pihla Viitala, as she reminded me of a curvier Kate Mara. Yeah, let that image sink in. However, perhaps most perfectly cast is Famke Janssen as the big bad Muriel. When she first appears on screen, all I could think was, “man, this just feels right.”

I think the biggest strength of Witch Hunters were the creature designs. The creative term went above and beyond here, as there are all manner of witches crammed into the running time. The climax features several dozen distinct makeups, some of which are only glimpsed for a moment, but all tell a story. It was this attention to detail that finally won me over.

This movie was also considerably more gory than I thought it would be. While it is true that a lot of the blood staining the walls is digital, it was good to see that Wirkola hasn't toned down his love for dismemberment. Actually, you may be surprised by how much of the effects work was done practically, specifically the animatronic scenes with the troll character, Edward.

I won't say the movie doesn't have its faults though. There are some unnecessary plot points and the employment of modern language and technology in a medieval setting is something you'll have to choose to accept, but for me these were easy roadblocks to traverse.

At a brisk ninety minutes, Witch Hunters doesn't overstay its welcome and concludes in such a way that I would gladly watch another, if Wirkola and company were so inclined. As far as I'm concerned, this movie delivered on the promise of its trailer, which, these days, is a feat in itself.
Posted by Jay Clarke at 5:18 PM