The Shining fan site The Overlook Hotel, recently posted something of extreme interest to fans of Kubrick's classic adaptation of the Stephen King novel. The ending we all know of Wendy & Danny leaving Jack to freeze in the hotel's hedge maze was not the way in which the film originally concluded. In its initial incarnation - which actually screened in New York and Los Angeles, before the prints could be recalled and altered - there was a hospital scene where hotel manager Ullman visits Wendy & Danny after their ordeal. Click the image below to check out the last few pages of the screenplay. 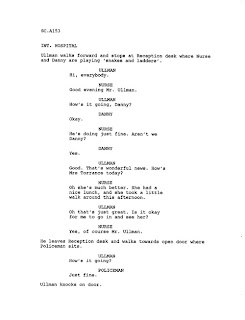 After Kubrick first watched the film with a London audience right before its release, he decided that the final scene was unnecessary and had it struck from all prints of the film. As with pretty much everything he ever did, he made the right call.

Music To Die To.


This week, about ten minutes of composer Roque Banos' score for the upcoming Evil Dead remake was released online. Perhaps most striking about this score is its thematic range. At points, it is soft and unassuming and others, it is unequivocally boombastic. Take a listen below.