About a year ago, while perusing the VHS section of Ebay, I first became aware of the eighties slasher 555. 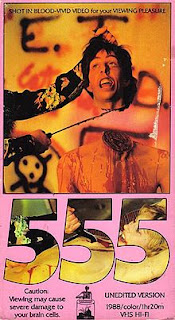 As you can see, it has a fairly striking coverbox. Considering its online price tag, I assumed it was pretty rare too. Fast forward to about a month ago, when I saw that Suspect Video had the recent Massacre Video release on their shelf for twenty bones. I, like a lamb to the slaughter, was unable to resist.
The marketing gods will be glad to know that, even now, there are still suckers out there that judge a book by its cover, as 555 is pretty awful. I didn’t realize until I popped it in that it was a shot-on-video affair. That's never a good sign, as I know of only one SOV flick actually worth more than its weight in plastic, and 555 is definitely not it.

Ohhh, that's what you meant.
So, how to describe 555… Imagine Blood Feast, except with twenty-five percent more scenes of detectives going over case details and interviewing suspects. Then, remove Fuad Ramses, the only character who adds any personality to the piece, and replace him with a silent – except when he lets out a Lucas-sized ‘Noooooo’ toward the end – always in shadow, hippie. Lastly, throw in the unsexiest leading lady I think I’ve ever seen just to make things even less interesting. 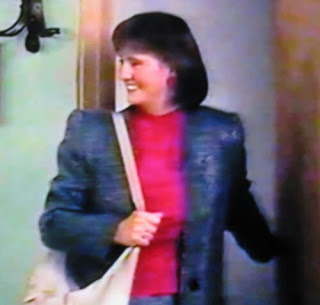 For the love of God, please don't get naked.
555’s worst offence though, is that it’s just fucking boring. It’s not even good bad. It took me two sittings to get through this, as I fell asleep during my first attempt. Unless your movie is called Nail Gun Massacre, that never happens to me. Oh, I will say that this was the first slasher I’ve seen where the killer actually has sex with the bloody corpses of his female victims. So, congrats? 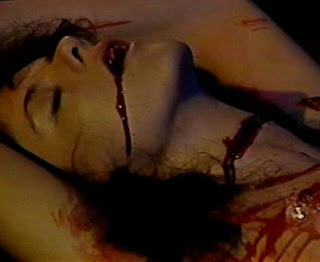 It is clear to me now that the only reason 555 has any notoriety at all, is due to its actually pretty fantastic decapitation sequence. No wonder they put it on the coverbox. I just wish I’d known that there was a “greatest hits” gore montage at the end, as it would have saved me an hour and change.
Posted by Jay Clarke at 10:08 AM