I went out to Toronto's first ever proper screening of Battle Royale last night, and it was a blast. I was also able to catch Richard Powell's newest short Familiar, which played beforehand. 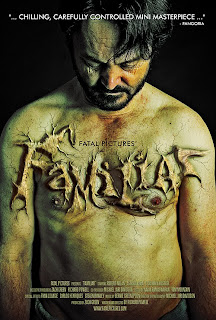 Familiar paints a picture of a very unhappy man. He has a wife and kid, who he disaffectionately thinks of as “warden” and “parasite” respectively, and a thankless job. But from within him, comes a voice with a plan to free him from his shackles.
This dark and twisted affair is Powell's follow-up to his 2010 short Worm, which also features Robert Nolan and his bitter internal monologues – at the Q&A Powell revealed the two characters were, in fact, twin brothers – going about his trivial existence. Nolan's performance is pitch perfect, and does well with a role that features almost no dialogue. 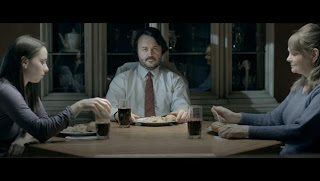 Thematically and aesthetically, it reminded me of a cross between two short film trilogies, Doug Buck's Family Portraits and Chris Nash's trio of skin disease films. Trust me; that's a compliment. Familiar is also well shot, the score is bang on and the effects, provided by The Butcher Shop, are fantastic. It is very clear that Powell and his crew at Fatal Pictures are working their way up to doing a feature and I'm very interested to see what that will be.
Posted by Jay Clarke at 12:10 PM