Battle Royale: From Page to Screen.

Reading is something I don’t do nearly enough. There are always so many things nipping at my free time, and since I’m such a slow reader – and not the kind of person who can retain info by just reading a few pages at a time – it is a practice that is often bumped for something else. So, like the pile of DVD’s on my coffee table, I also have a shelf of unread books. Koushun Takami’s Battle Royale is a novel I’ve had for a while, but its hefty size has always shifted it in the order. However, because of the impending Blu-ray release of its movie counterpart, I vowed to finally dig into it. 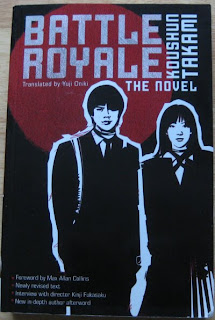 We all have films from our childhood that inspire us. Then, there are those special films that we pick up as adults, when we are far more jaded. For me, Battle Royale was one of those films. It’s an idea so simple, yet so subversive.


For the few people reading this who aren’t familiar with Battle Royale – and that number is rapidly dwindling with it now being incessantly compared to the popular Hunger Games series – it is a Japanese tale set in a dystopian future where a random class of school children are subjected to a yearly competition where they must kill each other off until one remains. 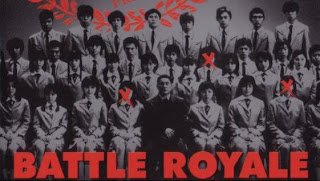 Comparing the book to the movie is a fascinating affair, as they both have their strengths. Obviously, the page has the advantage of going into detail about more than just the main characters. The book gives us a lot of background on some of the more interesting secondary players like computer-whiz Shinji Mimura and martial artist Hiroki Sugimura, who spends the entire game looking for his longtime crush Kayoko Kotohiki. There is also a lot of time devoted to my personal favourite, the devilish Mitsuko Souma. The movie does flash briefly on what spurred her psychosis, but Mitsuko is not a maligned outcast in the book, but rather the merciless leader of a female gang. 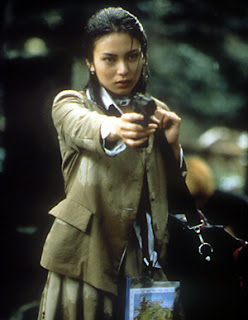 In the film, the dangerous “wild cards” Shogo Kawada and Kazuo Kiriyama are not exchange students that just appear in their classroom, but regular classmates. Although Shogo is a recent transfer to their class, he isn’t a stranger, and Kazuo is a feared gang leader and basically the male version of Mitsuko. I also feel the ending of the book is better, or at least less cheesy than the movie. The film’s conclusion was easier to shoot and better utilized its star, Beat Takeshi though.


On the flip side, there are a good number of things about the movie that bettered the book though. I think the setup of Kinji Fukasaku’s film is flawless and still remains one of my favourite openings of all-time.


The setup in the classroom is slightly different as well, but for the better. The main female character Noriko Nakagawa isn’t shot in the leg, like in the book, which makes her running around an island for the next few days a little more believable. Also, Yoshitoki Kuninobu’s death is a very dramatic demonstration of their explosive collars, which are all but absent from the literary version. Also, surprising as it may seem, there are far less gunfights in the movie. The amount of rounds fired off by Kazuo in the book is ridiculous. 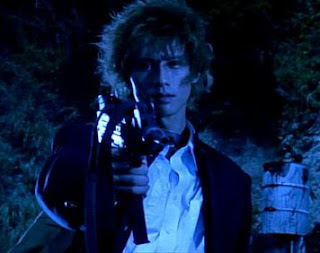 As is the case with any screen adaptation, there is some stuff that didn’t make the film, but a lot did in some capacity. There are several things that are cleverly combined, so very little is lost. Lastly, I think the overall picture of a futuristic Japan in ruin is a lot easier to ingest conceptually than the book’s Greater East Empire dictatorship.


So, whether you watch the movie, read the book or even the accompanying manga, you really can’t go wrong here. Each all take advantage of their mediums to showcase a definite highlight in Japanese fiction.
Posted by Jay Clarke at 10:01 AM

It really sucks that Platinum Dunes is doing an American remake of this film. Don't tell me Chad Kroeger will be doing the soundtrack too.

BTW good post on the House of Hell. No matter how much I tried to cheat, I could not find a way to solve that book.

It was definitely a blast looking back at those old FF books.

As for the BR remake, even with the general acceptance of a previously taboo topic that The Hunger Games ushers in, I will be surprised if anyone actually ends up making it.