It occurred to me recently that I haven't been doing as many posts about VHS and other vintage pursuits lately, so you can expect more of those in the coming weeks. It is, after all, why I started this thing up in the first place, isn't it?

On that note, a few weekends ago Schwartz & I took a trip out to The Vault in Cambridge and picked up some VHS. 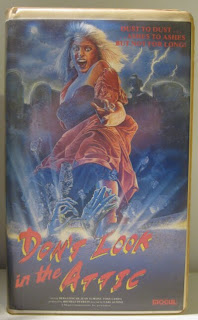 They really don't come more 'eighties home video' than this, do they? To be honest, I was hoping there would be a sweet Mogul video intro on this tape, but no such luck. 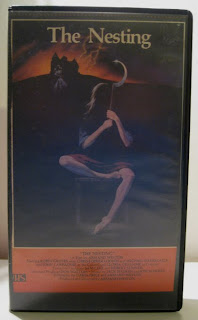 The Nesting is a movie that I've always known about, but never seen. I'm hoping to double it up for a future haunted house movie night. However, DirtyRobot & I still need to get our hands on a VHS copy of Superstition before that can happen. 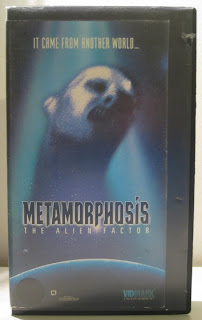 Not to be confused with either my previously mentioned Metamorphosis, or Don Dohler's blood, boobs & beast picture The Alien Factor. I remember this cover from back in the nineties, but only just recently - during one of the Laser Focus podcasts actually - found out this was an unofficial sequel to The Deadly Spawn. That obviously elevated this to 'must buy' status. 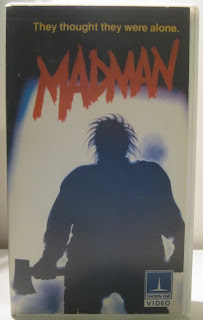 Lastly, is Madman. It's been a long time since I've seen this one, but I remember it fondly and put its antagonist Madman Marz up there with other second-tier icons like Slumber Party Massacre's Russ Thorn and My Bloody Valentine's Harry Warden.
So, there we are. Four more for the shelf. Check back tomorrow, when I throw up the posters I acquired on a similar excursion into Kitchener/Waterloo.
Posted by Jay Clarke at 10:10 AM

I went down that link you put up. It makes sense now why you call your site the horror section, if that's what you used to run for MV.

What surprised me is that you were termed. I figured you as a person who would move on to the next act of his life, after being at a job like that for a few years.

What did you do? Too much back talk to a manager? I doubt you would have been caught for nicking tapes.

Something like that. It was a my-word-against-theirs situation. Turned out to be a blessing in disguise anyway.