I Loved It To Pieces

Despite my current lack of wellness, I ventured down to The Bloor for a special screening of the 1982 gore flick Pieces last night.

After some live theatre featuring a planted audience member (I’m pretty sure it was the same chick that was sticking stuff to herself with a staple gun at the TAD party last October) being eviscerated onstage and then strangled with her own intestines – do you think I could really make this shit up people? – and two perfectly selected trailers (They’re Coming To Get You featuring the uber-lovely Edwige Fenech and the ‘psychosexual’ jaunt Torso) I was transported to the land of awesome. 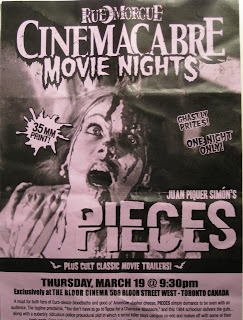 Fourty years after a little boy chops up his mother with an ax, nubile young college girls begin falling under a maniac’s chainsaw on campus. The list of suspects is long, but time is short. Who will be left in one piece?

No one is surprised more than me that I’ve never seen Pieces before now. I know that old coverbox like the back of my hand from the days of it staring back at me from video store shelves, but in terms of viewage, it was just one that slipped through the cracks. To compound that, I knew nothing of what it was actually about. I always thought it was a cheesy eighties low-budget slasher, but in reality it’s a lot closer to the pictures coming out of Italy at the time, than the sequel heavy stuff being cranked out on our shores. Pieces shares so much in common with Sergio Martino’s Torso – made the following year – they could be blood soaked sisters.

In a word, Pieces is FUCKING HILARIOUS. I had no idea this movie was a comedy. Whether or not that was intentional is irrelevant at this point, isn’t it? The more I think about it, the more likely it seems to me that the filmmakers must have been in on the joke. Holy crap, the dialogue is priceless! And the characters?! First, there’s the grizzled detective Bracken (played by genre stalwart Christopher George in one of his last films) who always talks through an unlit cigar. Then there’s the bombshell undercover cop/tennis pro Mary (Linda Day) who for some reason needs to be protected by horny college student Kendall (Ian Sera). Then there’s groundskeeper Willard played by Paul Smith. Considering Smith was in Sam Raimi’s sophomore flick Crimewave as one of the exterminators, it didn’t take me long to recognize him – besides I’d know that leery glower anywhere. And I damn near lost my shit when the kung fu professor showed up. That was a true ‘WTF? Moment’ for the ages; right up there with Nic Cage in a bear suit. I was so busy laughing during this movie, I almost missed all the great camerawork. Taking another cue from the giallo genre, the movie has some great little set pieces. Which brings me to the gore. Pieces does not skimp. The water bed, elevator and finale sequences are highly memorable and the reason why this movie hasn’t disappeared into obscurity. I guess the message of Pieces – and this is for all those parents out there – is NEVER take away your child’s pornography.

Pieces is as good as a case of lollipops, wait no, it’s more like trying on shirts with no labels to see which ones fit, errr… To put it simply, I walked out of the theatre last night almost wishing that I had seen this movie twenty times already. Then it dawned on me. No, this was probably the best way I could have ever experienced this movie; in a theatre surrounded by like minded individuals. What a fantastic evening!
Posted by Jay Clarke at 6:21 PM

I think I may actually have seen Pieces twenty times already, and it just never gets old. There's so much about it that's so wrong and yet so right. From the opening skateboard-through-the-glass sequence that has nothing to do with anything else in the movie to the crotch-crushing final shot, it all comes together into pure cheesy awesomeness. Sadly, I haven't seen it in a theater since it first came out, lo these many years ago.