I can't talk too much this morning, I have much Killzone 2 to play.

A trailer for a short film that is playing at SXSW surfaced on the tubes this week.

Any Way You Splice It.

Vincenzo Natali's (Cube, Nothing) new film Splice is set to release later this year (Midnight Madness perhaps???) and some new stills dropped on Bloody Disgusting a few days ago. 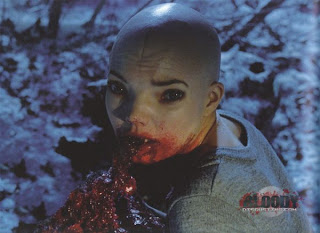 I was interested in seeing this gene-manipulation fable anyway because I like Natali's work and I went to high school with one of the film's stars (Brandon McGibbon), but after these pics, I am really amped up. Talk about DARK shit! That second one kind of reminds me of the vampire design in 30 Days Of Night... and also that infamous Playstation commercial by Chris Cunningham.

Have you ever just randomly watched videos on YouTube? There is some crazy shit out there. Things can get even more out there, if you start clicking on related videos. It's like following the yellow brick road... if it were paved with souls and wasted time and led to hell. Take this path for example.

Exhibit A? This really creepy commercial for Orville Redenbacher.

WTF thought this was a good idea? It would be like digging up Walt Disney - sorry, UNFREEZING Walt Disney - to shlep their newest picture. Since when do zombies make good spokespeople? So, then I saw a stange sight on the right column, clicked on it and came up with this Exhibit B.

Does this clip really need to be almost two minutes long? Creeeeeeeepy. But not as creepy as Exbihit C.

All I can say is thank God it's only four seconds. I wonder if Chris Cunningham has seen that? And last, but certainly not least is Exhibit D.

I have so many questions for this dude. First of all, WHY???!!! And second, how did you figure out you could do that? I had to get off the YouTube train there for the sake of my sanity. Well, that and it was five o' clock and time to go home.

That's all for this week. Have a great Sunday.