I adore the 2004 French actioner District 13 and since its sequel is hopefully coming to our shores later this year, it is this month’s Non-Horror selection. 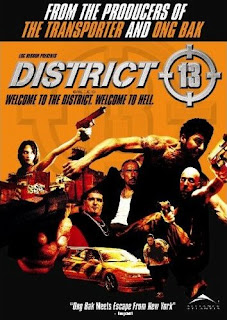 In 2010, the Parisian slum of District 13 has been walled in and left to fend for itself. When its inhabitants steal a bomb, the French government dispatch top cop Damien Tomaso (Cyril Raffaelli) to retrieve it. With reluctant guide and ex-resident Leito (David Belle) at his side, they have less than twenty-four hours before the bomb is set to explode.

Seemingly a backlash to the mainstream adoption of wire-fu in films like Crouching Tiger, Hidden Dragon and The Matrix trilogy, down-and dirty martial arts flicks were set to make a comeback. Shortly after The Transporter and the emergence of Muay Thai sensation Tony Jaa (Ong Bak: Thai Warrior), District 13 burst onto the scene in 2004. At first glance, it may look like a throwaway actioner, but I can assure you it’s way more than that. The parkour-infused action in this is spectacular. I mean, take a look for yourself.


Although I can find no confirmation of this, it’s a pretty safe bet that the dazzling construction site chase at the beginning of 2006’s James Bond reboot Casino Royale was inspired by the above sequence. In addition to the incredible action bits, the chemistry between stars Belle – who is credited with basically inventing parkour as it is known today – and Raffaelli is great, as well. If you think you recognize the latter, it is because he also appeared in the 2001 Jet Li vehicle Kiss Of The Dragon and as the bothersome adversary of John McClane, Rand in Die Hard 4. If you add in actress Danny Verissimo, as Leito’s fiery sister Lola, you have yourself one hell of a team. I LOVE this chick and wish she were in more stuff. Like a lot of the action films Luc Besson (The Fifth Element, Leon) has produced, District 13 is a high-energy affair with little story, but that was never an issue for me. This is a helluva fun time with awe-inspiring feats of strength and agility. A lot of people just remember it for the clip above, but watching it again recently I was reminded of the half dozen other equally awesome set pieces.

If you are at all into martial arts flicks, I can’t imagine you having not seen this one already, but if you haven’t, it’s time to do yourself a favour and track it down.
Posted by Jay Clarke at 1:09 PM