Alma Is Coming... And She Is Pissed!

I got my hands on F.E.A.R.2: Project Origin recently and played the hell out of it all last week. 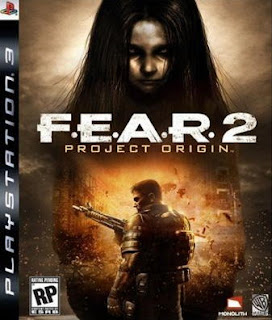 F.E.A.R.2 is a big bag o’ fun. After my ultimately disappointing experience with Resistance 2, F2 reminded me of what I love about first-person-shooters. It is a wonderfully designed game with mad helpings of stuff that goes boom. The two things that stand out right away are the weaponry and the artificial intelligence. The weapons themselves are pretty standard, but it is the weight of them that is instantly apparent and even more enhanced by the Dualshock functionality. And what is it about bullet time that never gets old? I must have cut down hundreds of replica soldiers in slow motion and every time was as fulfilling as the first. I didn’t get into Fallout 3 because all the video footage I’d seen was basically “I see enemy/stop time/95% headshot/cut scene of head exploding/rinse and repeat” which made me think ‘wouldn’t that get boring?’ After my experience with F2, the answer is clearly no. The addition of the drivable ‘mechs’ was a stroke of genius. You can literally SHRED through waves of enemies with one of these things. I would have a played a whole game of that! F2 also builds on the already impressive AI from the first game to make it something truly remarkable. Enemies are constantly moving, interacting with their environment and actually work as a squad to flank and flush you out of hiding.


And F2 doesn’t skimp on the scares. There are plenty to be had and they know what buttons to push. In addition to the ubiquitous Alma, you encounter several other supernatural baddies, as well. A highlight is when your flashlight stops working inside an abandoned school filled with swiftly moving spirits that are basically just wisps of smoke with angry eyes. Let’s just say the combat shotgun was my best friend during that level. One thing that surprised me was the kinship I felt for my squad. I’m not sure how to quantify this. It’s not like there was a lot time spent getting to know them, but for some reason I actually felt like part of a team. Maybe it was the realistic character models or constant communication (or both) that contributed to that.


The story is pretty convoluted, but I did like how it was conveyed throughout the campaign. Instead of the voicemail messaging of the original game, you collect pieces of Intel scattered throughout the levels. The more you find the more the craziness around you starts to make some kind of sense. I think the only thing I was unhappy with – apart from the glitchy tacked-on multiplayer that should be avoided at all costs – was the ending, or rather the lack of one. It was so open-ended I felt like this game should have been called F.E.A.R.2 Vol. 1. Although, I can’t complain too much as this just means there is more to look forward to.

F.E.A.R.2: Project Origin is an excellent single player experience that is definitely worth a rent. It doesn’t reinvent the wheel, but it fully delivers on everything I want in a FPS.
Posted by Jay Clarke at 7:54 AM