The subject of this installment of On The Shelf is the new Spanish horror Eskalofrío aka Shiver, which Zip.ca finally decided to send me after what seemed like eons. 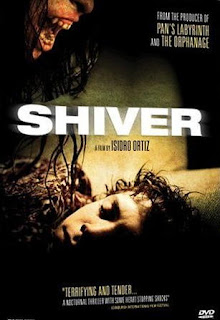 Xeroderma afflicted Santi (Junio Valverde) and his mother move to a remote Spanish valley town to in order to better shield him from the sun. Soon after his arrival, people start turning up ripped to shreds. Is Santi responsible for these grisly murders, or is there something more sinister out there in the woods?

There is so much to like about Shiver. I thought the first act was absolutely stellar. We are introduced to a character with a condition that is rarely explored in film (2001’s The Others – another Spanish production coincidentally - is the only other example I can think of) and then weird things start happening around him. The setup and editing is so skillfully done, it had me on the edge of my seat. A great deal of Shiver seemed so fresh to me. I mean, there are some contrivances – night vision makes a brief appearance – but it always seems to bounce back quickly. Shiver is also strange in that it felt like three seperate movies. I’m not sure if this was intentional, but it seemed like the film shifted focus a few times. 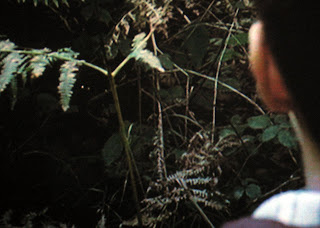 Unfortunately, this brilliant setup proved to be somewhat anti-climactic when the antagonist was revealed. Director Isidro Ortiz does so many clever things to ratchet up the fear, but I could never shake the simple fact of what I was actually looking at. It was a fundamental thing that really prevented me from lifting this movie from good to great. It’s a call that everyone will have to make when they experience it, but it left me wanting. Shiver is a solid film that has several tense moments and is gorgeous to look at. It is also well acted, although Valverde (who we first saw in 2001's The Devil's Backbone as a boy also named Santi) does get a little too worked up at times. I also want to make special mention of the phenomenal sound mixing. What is it about forests that lends itself to surround sound? I remember the climactic scene in Ils (aka Them) also had my muscles tensed just like this one did. I’m not surprised the producers of Pan’s Labyrinth and The Orphanage got behind this production. There is a darkly fantastical quality to Shiver that falls right in with those sensibilities. If you are a fan of those aforementioned titles, then I would say that Shiver is required viewing.
Posted by Jay Clarke at 10:05 AM