A trip out to Trash Palace was in order last Friday. They were playing a print of an old 1976 British thriller called Schizo. The last time they showed this was in 2007, the same week I first heard about Stacey Case’s cinema shrine and I’d been waiting for almost two years for him to play it again. Coming through the door, a few familiar faces met me, as a friend’s birthday party was happening there that night. Facebook had alerted me earlier in the day that it was her birthday, but I had no idea that Trash Palace was the location she had decided to celebrate it. That was a nice added bonus because having people to talk with during reel changes is always nice. There was even cake! 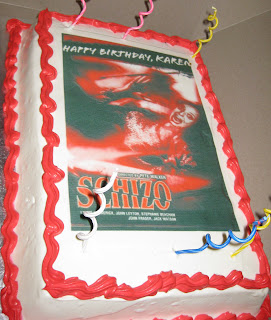 It’s the camera flash reflecting off the icing that caused that weird negative effect in the picture. Stacey, the curator of Trash Palace, introduced the movie and served up some vintage Roger Ramjet cartoons before the main feature spooled onto the screen. 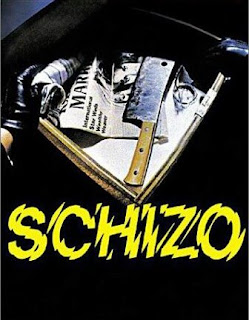 When ex-con William Haskin (Jack Watson) reads in the paper that famous ice skater Samantha (Lynne Frederick) is getting married, he packs up his belongings – which include a very large knife – and travels south to intercept at her wedding.

I’ve heard Schizo referred to as a slasher, but that’s not accurate. Considering the slasher genre really hadn’t been established yet in 1976 (slasher mold-maker Halloween was still two years away) it maybe jumping the gun a bit on giving it that label. I would rather tag Schizo as the Brit’s ‘stab’ at the Italian giallo genre, which is basically what the modern slasher evolved from. All the ingredients of the giallo are there, the gruesome set pieces, the black-gloved killer, a smattering of nudity and a mystery that is revealed in the last reel.

As far as giallos go, Schizo isn’t a particularly good example of the genre. It is clumsy in parts and I had a pretty good handle on where it was going fairly early on. That’s not to say that I didn’t have a great time watching it though. The assembled Palace crowd (about fifty strong) was hooting and hollering during the movie in true MST3K fashion. However, we were laughing with the movie, not at it. Or at least I think we were. Leading lady Lynne Frederick is quite striking (that should be no surprise to anyone who watches giallos on a regular basis) and is surrounded by an eclectic bunch of characters. Her womanizing friend/psychiatrist Leonard seems strangely effeminate, her female psychic bears an unfortunate resemblance to Ozzy Osbourne and the antagonist, the lumbering old codger Haskin, looks like a pissed off James Cromwell. You throw in some inspired death sequences and you have yourself a rip-roaring time. And this time I actually remembered to take some decent pictures of this old space. 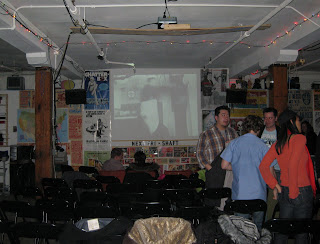 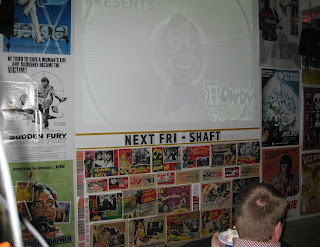 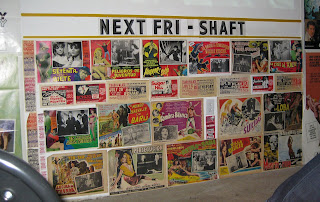 I don’t spend nearly enough time at Trash Place, but fortunately next month I hope to be there twice more, for screenings of the killer-ant flick Phase IV (coincidentally also featuring Frederick) and a second helping of Canadian giant rat opus Deadly Eyes. That, my friends, is a big butter-soaked tub of awesome!
Posted by Jay Clarke at 12:51 PM

hey, just wanted to let you know I love your blog. you seem to have a good taste in horror movies.. it's my favorite genre, and it seems to be somewhat difficult to find a good scare. thank you for blogging.

You're very welcome, thanks for the kind words!