Last week was the European Film Market, where all sorts of goodies come out of the shadows. The most exciting of which is the new French zombie flick The Horde. This sounds like balls-out action-oriented horror involving cops, gangsters and flesheaters in a ménage à trois of gore. For more info, click here.

In a recent interview with AV Club, Bruce Campbell finally gave a final answer on the subject of Evil Dead 4. And that answer was NO. Here is what he had to say on the subject.

"No. I think there should be an end to everything. I mean, did anyone really want Indiana Jones 4? The answer is no. I’ve taken a poll in about seven theaters now. Of 300 people, three hands go up. You are bound to disappoint. I would rather disappoint with a brand new original movie. People worship Army Of Darkness,and God bless them for it. It’s a beautiful thing. The movie bombed when it came out, and not many people are aware of that. Twenty years later, the thing has picked up speed, and it’s on American Movie Classics now. That was a long time ago, and whatever we do next will always be compared to Army Of Darkness, and I don’t see how we can win. You make that movie, and I can tell you the quote right now, “Oh, it’s not quite as good as Army Of Darkness.” Then we would have gone through immense physical pain and anguish to bring something out that ultimately disappointed. That’s really not what I’m into these days."
The man makes some excellent points. I am extremely happy that he has finally decided to speak out on it definitively, if only for the fact that I don't have to hear someone ask about it when I see him at Q&A's. If we were still in the nineties, a fourth Evil Dead would be an entertainable idea, but those days are long gone. Let the Evil Dead series lie and be remembered as it should be, one of the greatest movie trilogies ever put to film.
More Voorhees
Here's a couple of cool fan-created Jason pickies. I found the first one online this week and the second (by Danomight) I've had on my hard drive for quite some time. Pretty cool stuff! For an enlarged version of the second pic, click here. 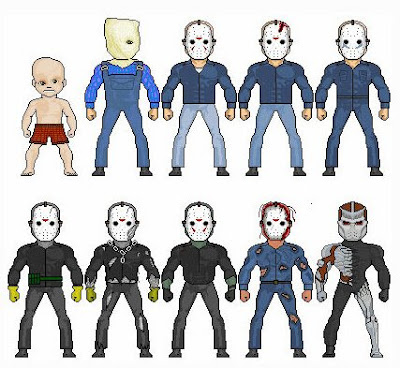 I love that, but the ninth Jason should really be the mistachioed black coroner who ate his heart.