His Name Was Jason.

Since I won’t be doing a review for Platinum Dunes’ new incarnation of Friday the 13th, I figured I’d sound off on the OTHER new Friday the 13th release. 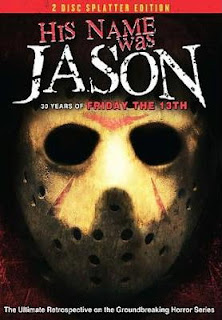 I had an absolute blast watching this DVD. What a nostalgic trip down memory lane! This disc is PACKED with great stuff, first and foremost being the main documentary His Name Was Jason: 30 Years Of Friday The 13th. The wraparound vignettes – which feature Tom Savini spewing out groaners while walking around Universal Studio’s Camp Blood attraction – are pretty hokey, but can be forgiven in the face of the overwhelming amount of people they got onboard for this project. Seriously, the parade of actors and crew that appear in this documentary is incredible. It was like looking through an old high school yearbook. I wouldn’t be able to name off all the lovely ladies from the series that appear, but some notables for me were Amy Steel, Elizabeth Kaitan, Lar Park Lincoln

and Judie Aronson. Those interviewed cover the stories we’ve all heard before, like the story behind the scare at the end of the original and the origin of Jason’s iconic hockey mask, but there’s also a lot of new stuff covered like Aronson’s bout with hypothermia, and Tiffany Helm’s (Violet from Part 5) reshot death scene. I have to say that I’m okay with the latter because I remember having a real soft spot for Vi and her original exit may have blown my eleven-year-old mind. In addition to the cast and crew, many others chime in with their thoughts. Web journalists Ryan Rotten and Brad Miska (from Shocktillyoudrop & Bloody Disgusting, respectively) appear, as well as upcoming horror filmmakers like Adam Green & Joe Lynch. I think the only glaring omissions to the line-up of talking heads would be Corey Feldman, Crispin Glover and of course, Kevin Bacon. A lot of time is spent showing how pervasive the character of Jason has become in pop culture, covering the copious amounts of merchandising and references in other

media. Probably the best thing about the doc, is that they have assembled every single person who ever played Jason Voorhees. The Men Behind The Mask featurette has extended interviews with all eleven men, including the newest, Derek Mears. He seems very sincere in wanting to do a good job. Seeing him speak so passionately about it reminded me of talking to Andrew Bryniarski about playing Leatherface in 2003. I had a good hour of his time at the ‘04 Festival Of Fear and was really struck by his commitment. It didn’t make me like the remake anymore, but I did respect him a great deal for how seriously he took the role. Aside from the main documentary, there is so much stuff on this two-disc set that it actually took me three sittings to get through it all. The Final Cuts feature has extended interviews with each part’s director. There are some great stories to be told here, including Joseph Zito talking about how his earlier work on The Prowler got him the job on Part 4 and Rob Hedden showing off the actual guitar that caved in J.J.’s head in Part 8. I’m still not 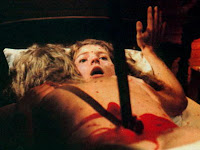 buying Sean Cunningham’s assertion that Bay of Blood had no influence on Friday the 13th Part 2 though. The featurette From Script to Screen speaks with the many screenwriters that have worked on Friday and Dragged From The Lake showcases about a dozen random stories from within the productions. Also included on the disc are a bunch of fan films, the funniest of which is the Angry Video Game Nerd reviewing the vintage Nintendo game Friday The 13th. There are also a few location visits as well as tons of other stuff I will let you discover for yourself.

So, while the wraparound stuff in the doc is on the cheesy side, there is no denying the sheer volume of interesting info in this set. His Name Was Jason is a must-watch for any Friday the 13th fan.
Posted by Jay Clarke at 12:00 PM