How’s this for fate? For weeks I’d been thinking ‘I really want to check out that Norwegian flick Cold Prey’ and then last weekend, what do you know? I won the DVD in a raffle. It’s been a few weeks since my last On The Shelf, so I guess it was meant to be. 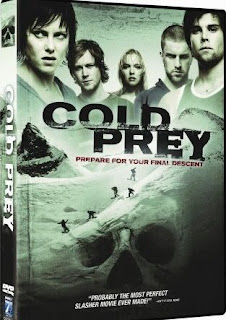 Five friends travel to an isolated mountain to do some snowboarding. When one of them breaks a leg, they seek refuge in a nearby abandoned hotel. It doesn’t take them long to figure out that they are sharing the accommodations with someone who doesn’t like visitors.

You know I really shouldn’t feel anything for these extreme sports junkies in horror films. If you are going to participate in an activity where you are just asking to shatter a limb, then you should expect these worst-case scenario situations. I’m a sucker for a slasher though, so I’ll always end up rooting for the final girl. 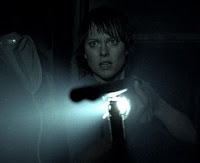 Cold Prey was released in 2006, yet it just came out on DVD this past January. What gives? True, this movie does not reinvent the genre, but it certainly didn’t deserve to be buried all this time either. Cold Prey’s simplicity is what works for it I think. Five people trapped in a location with a killer. It doesn’t get more uncomplicated than that. I’m not going to pretend that I know anything about the filmmaking climate in Oslo, but the production value was lot higher than I was expecting. If you watch the special features, you can see they employed tons of mostly undetectable CG in post to gussie up the final product. I think the high quality may have been the reason I forgave this movie for being a slasher with almost no gore in it. In the end, it didn’t seem necessary, as all the other components – including good acting and a great score by Magnus Beite that reminded me of Ils – came together fine without it.

I started On The Shelf to make sure that you never leave a video store with a lemon and although Cold Prey won’t win any awards, it is a solid example of the genre. Here’s to finding safer pastimes. How about knitting? 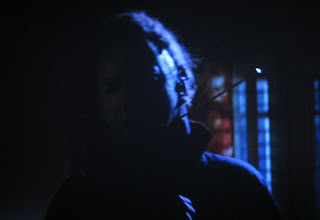 If you'd like a second opinion on Cold Prey, Mermaid Heather also covered it recently. See what she thought by clicking here.
Posted by Jay Clarke at 7:18 PM