For this month’s Non-Horror Selection, I have chosen the appropriately titled Thirteen. This is a modified version of a review I originally wrote in 2003, during the theatrical release of the film. 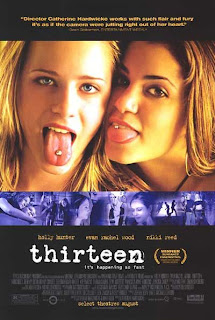 Leaving the theater after seeing this equally compelling and disturbing film, it made me thankful that I am not a parent. I am glad I’m not the one responsible for the whirling dervish that is the teenage girl. When one goes to see a downward spiral drug film – which is what I was expecting from this film, but to my relief not what I got – you have the comfort of knowing that most of it was cooked up in a Hollywood boardroom. Thirteen however, was co-written by teenager Nikki Reid (who also stars as Evie) so you can assume that at least some of it was rooted in truth. And that’s scary. Very scary. Although the two main characters come from homes that are far from ideal, it’s a sweeping generalization to say that all thirteen-year-olds are climbing out their bedroom windows at night to go get high, yet it is also ignorant to think that it never happens either. I think the main issue here is that these days girls are growing up too fast. I suspect this is due, in part, to the fact that the media has started to target this previously untapped demographic. Take the music industry for example. In the mid-nineties, girls five ten years of age were suddenly deluged with images of The Spice Girls and Britney Spears. I’m obviously showing my age here, but I can tell you that when I was in middle school, none of my female classmates dressed like Christina Aguilera. 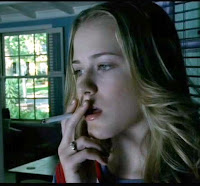 Every mother should see Thirteen, just for the fact that I believe there are a surprising number who don’t have the slightest idea what their daughters are doing when their backs are turned. There were several older women in the audience at the show I attended and heard many outcries of awe, surprise and disgust during it. The following instance of naiveté supports my point. Early on, Tracy (the protagonist played by Evan Rachel Wood) lights up a cigarette to which one of the ladies behind me gasped, “She’s smoking!?” I found that puzzling as just a few scenes before, Tracy and Evie were breathing fumes from aerosol cans and punching each other in the face because they were numb to the pain. Yet the smoking is what put up a red flag for this woman? Thirteen also boasts a great adult cast featuring Holly Hunter, Deborah Kara Unger and Jeremy Sisto as the shaky role models for the uncontrollable adolescents. The well-crafted performances by Reid and especially Wood are what really stay with you, though. Some of the stuff that came out of these girls’ mouths just made me wince. It wasn’t just WHAT they said either, as it shamefully reminded me of lipping off to my parents when I was that age, for no other reason than I was in a sour mood.

If this film accomplishes anything, it’ll be to encourage parents to talk to their kids and make sure that their lives never become as intense as the ones contained within Thirteen. Again, I remain thankful.
Posted by Jay Clarke at 12:32 PM