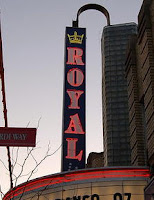 I managed to squeeze in a screening of the animated anthology Fear(s) of the Dark last night at The Royal. I’m glad to report that Fear(s) was worth the stiff back I am suffering from today. I often forget how punishing those old seats can be. How did I ever manage to get through Inland Empire in ’07 without serious injury? But I digress. It is difficult to describe Fear(s) as the stories within are not named and are fragmented between a pair of wraparound devices. It was put together by a group of contemporary graphic artists and the narrative led me to believe Fear(s) is meant as a single tapestry rather than an anthology, but you can take it as either.

During the first full story (from Charles Burns) about a shy bookworm in a relationship for which the term ‘unhealthy’ was invented, I was immediately struck by the familiar art style. After racking my brain, it finally came to me that Burns was the guy who wrote Black Hole, a graphic novel that’s been staring at me from my bookshelf since last year, yet still remains unread. His Fear(s) story was cool, in an Outer Limits kind of way. The second story (by Marie Caillou) that focuses on a young Japanese girl stuck in a bad dream is pretty effed up. Caillou’s work is known for its strong Japanese influence and it is evident here as many themes I 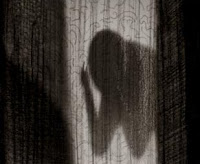 see often in films from the Far East are revisited here. They are a strange bunch; and that’s why I love them so. The third story (by Lorenzo Mattotti) about a small village besieged by an unknown creature is probably the most straightforward of the group. It had an old school sketchbook style that made it standout from the rest. The last and my favourite of the bunch (by Richard McGuire) follows a lone traveller taking refuge from a snowstorm in a creaky old house. It excellently uses shadow and light, rather than words, to tell the story and I was into it the whole way. The graphic style

was similar to that of the 2006 sci-fi flick Renaissance. The sound design – which is fabulous throughout all of Fear(s) – really excels here. Pierre Disciullo and Blutch orchestrated the two wraparound bits of the movie. I wasn’t too struck on Disciullo’s voice-over philosophizing, but Blutch’s piece featuring the old man terrorizing the countryside with his pack of dogs had an interesting look to it, kind of like those old Mystery! intros. 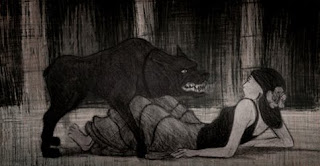 What happened next was... unexpected.

I think my only criticism of Fear(s) is that it seemed somehow unfinished, as both Caillou and McGuire’s installments end rather abruptly and without resolution. I guess it’s good that I wanted more, but I couldn’t help feeling they were missing an ending. Fear(s) is a scant eighty-two minutes, so I would have loved another ten or fifteen to wrap things up. Even though its individual parts work better singularly than they do as a whole, Fear(s) of the Dark is still a cool little oddity that showcases the many different phobias that plague us as a species.
Posted by Jay Clarke at 3:10 PM