I haven’t taken part in the Final Girl Film Club for a while, but when I saw The Beyond was this month’s title, I just HAD to get in on the action. I’ll never miss an opportunity to take a trip down memory lane. Since I have not sprung for the DVD as of yet, I had to dig into my archives and pull out my old VHS copy sandwiched in between The New York Ripper and I Spit On Your Grave. And why do I love The Beyond? Simply put, I LIVE for this shit! 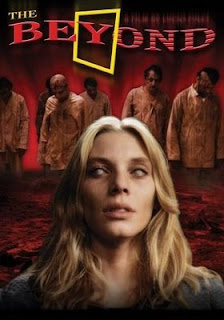 I discovered Lucio Fulci fairly late in life mainly because his films just weren’t available to me until I started frequenting the crusty video archives of The Big Smoke. And even then, they were usually ancient VHS bootlegs, often complete with Asian subtitles. Ah, the primitive era before the likes of Blue Underground and Media Blasters. Fulci has a lot of fantastical titles in his catalogue, but he is perhaps best known for two in particular – Zombi 2 (known domestically as Zombie) and The Beyond.

The Beyond works because of its balls-out atmosphere. Fulci, like most of his Italian contemporaries would sometimes forego the baser things like, oh I don’t know, a story, logic and a coherent narrative, but that never seemed to matter when he was hitting me with wondrous set pieces, music and gore. And that brings me to the main draw of a Fulci film and the reason he is known as the Godfather Of Gore. Fulci often worked with a man named Giannetto De Rossi. Neither of these two guys were known for their restraint. If make-up effects were fine art – and I happen to believe they are – then ol’ Gio would be the Rembrandt. No one does throat rips as spectacularly as this man does. And again, I can forgive the sometimes clumsy setups – just why are killer tarantulas hanging out in a library? – because the payoffs are so memorable. Although we lost Lucio in 1996, De Rossi still continues to splash around the red stuff, most notably in the modern staple High Tension in ‘03.

I know the word ‘classic’ is thrown around a lot these days, but there is no denying that if you get a bunch of horrorphiles together in a room – at least ones that grew up in that aforementioned VHS era – they will tell you that Lucio Fulci is royalty and all will have a fond memory of the first time they saw The Beyond. For people looking for more Fulci, you should check out his pair of gialli. Don’t Torture A Duckling and A Lizard In A Woman’s Skin are both worth your time and are now thankfully readily available due to excellent DVD reissues.
Posted by Jay Clarke at 10:12 AM

Found your site as a fellow Final Girl Film Clubber. Nice work, and I like the element of documenting the days of video stores. I have some fond memories of those days myself.

Why can't you guys make horror short films on 16 mm or digital HD ? I believe you have to work in horror films because of your encyclopedic knowledge of the genre

Really great job I will continue to call for all our SF Bell plumbing needs and emergencies….Great job. Had hot water leak under garage floor on Sunday, came out got me at least cold water running and a quote. Fixed and done by 10am on Monday plumbers near you, good price as well. plumbers near me

He was prompt, able to work with my scheduling conflicts, and completed repairs very timely. His prices were very fair as well. plumbingvision.com

Hi Dear, have you been certainly visiting this site daily, if that's the case you then will certainly get good knowledge.
wordpress site

Only run laundry and dishwasher loads when they are full, as this not only saves water; it saves electricity as well. plumber near me

I would definitely make use of their services again.united states plumbing