Today's letter is one of the least used in the alphabet, but I still had some choice titles to pick from. I went with Boaz Davidson's Hospital Massacre aka X-Ray. 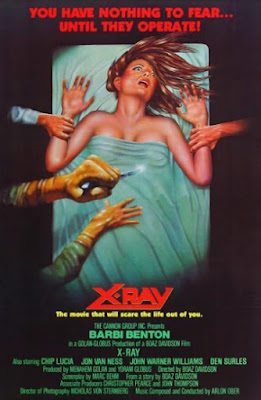 Susan's (Playboy Playmate Barbi Benton) visit to a hospital to pick up some routine test results turns into a nightmare as staff and patients alike are murdered around her.
The first thing that I wondered when I started watching this movie was if I had accidentally put in Bloody Birthday. X-Ray starts with a bunch of kids - LITERALLY two of which were in Bloody Birthday - being creepy while having cake in a house in California. I had to check more than once I wasn't being tricked. Anyway, after the shocking opening where one of the kids gets hung up on coat rack 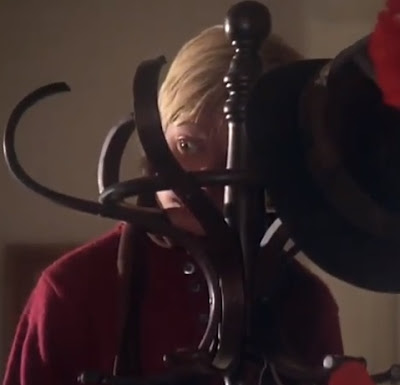 We then fast forward to Susan as an adult - a very buxom adult - who for some reason has to pick up some test results from her doctor. She then spends an excessive amount of time in an elevator while all manner of sight gag red herrings occur that made me think I was also watching a spoof ala Student Bodies. In actual fact, the killer just needed some time to switch Susan's test results so she is detained and terrorized for next hour.
I'm not sure if X-Ray was meant to be a comment on the shortcomings of the American health care system, but that's what it ends up being. This poor woman just wants to know what the hell is going on and then simply leave, yet everyone is treats her like she's hysterical, even sticking her in the psych ward at one point.
Meanwhile, a dude in scrubs and a surgical mask is cutting his way through the entire building, often in the most bizarre ways possible.

It all ends up where most movies that take place in tall buildings do; the roof! And that of course means someone is falling to their death, most likely while on fire. You know, that should be my next video. A montage of horror characters falling off buildings.
X-Ray's strength is its absurdity, but it doesn't fully commit to it as much as it should have which is why your attention may wane from time to time. Benton sure was a looker though.
Posted by Jay Clarke at 7:30 AM