So here we are at the last letter with a movie I found while researching Carpenter Brut for a listicle in last month's Halloween issue of Rue Morgue. 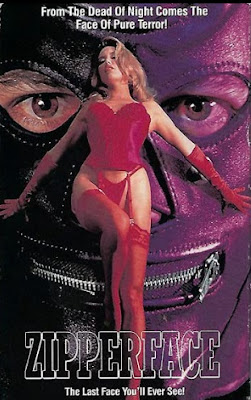 This is basically everything you would expect from a Z-grade (wink!) SOV slasher with less than stellar acting, story and boom mic control. Only this one, save for one beheading, was relatively bloodless so it didn't even deliver on the gore like equally trashy SOV's like 555 and Night Ripper. Jesus, that's two movies I've watched in the last week that were WORSE than Night Ripper.

The killer barely does anything but crunch around in his leather suit and get kicked in the crotch. I wonder if Wes Craven was one of the dozen people who saw this movie and thought, that's something Hollywood needs, more bumbling killers! I will give credit where credit is due and say that for a movie that probably cost a dollar-fifty to make, there were a pair of decent stunts in a high fall and a car windshield hit that were both culled, among other things, for Carpenter Brut's video for Leather Teeth.

The rest, well, you've got a detective fraternizing with a creepy photographer suspect, a parade of the reddest of herrings and a killer whose knocking off witnesses because they could recognize him, even though he was wearing a mask the whole time.

Yeah, not the best. I wager director Mansour Pourmand should be thanking Brut for saving his movie from complete obscurity.