After Grotesque and Hellgate, I needed to watch something that had a good chance of being halfway decent. I remembered the Taiwanese film Incantation getting a little buzz when it recently hit Netflix so here we are. 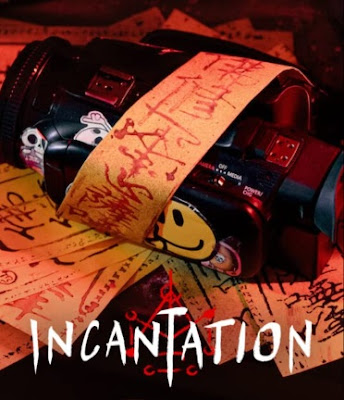 Mother Li Ronan (Hsuan-yen Tsai) goes to extremes to protect her daughter from a curse she contracted years earlier.

Yeah, this was pretty solid and serviceable as both Asian horror and found footage. The lore is dense and believable, especially when you factor in the story was inspired by a real family in the 2000s that thought they were possessed by angry spirits.

I think the found footage angle works for the most part. I mean, it's no Noroi: The Curse, but the story is good enough to warrant the format. And in true Asian horror fashion, there are some decent scare set pieces, including the one in the shrine of the priest and his wife.

I'd say Incantation's main detractor is it's a little long in the tooth. It holds off showing what is actually inside the “infamous” tunnel for a little too long. It's one of those cursed films where you get the idea that said curse is stronger than everyone involved so the third act is you just waiting for it to kill everyone off.

Overall, worth a watch and certainly a breath of fresh air from the stale dreck I took in the least few days. And as soon as I say that, tomorrow we have a movie about a shark whisperer...