This viewing was a long time coming. This 88 Films release of Beyond the Darkness has been sitting on my shelf for a decade after being brought over from the UK. Anytime my parents would visit relatives overseas, my Mom would always bring me back something horror related. Only she's horror averse so it would inevitably be something random that she thought I'd like. When I was younger it was easy because she'd grab me the latest James Herbert novel (which were never available on this side of the pond), but since he's no longer with us this particular time she just picked a DVD with the most striking cover. And to her credit, it does have some pretty bad-ass artwork. 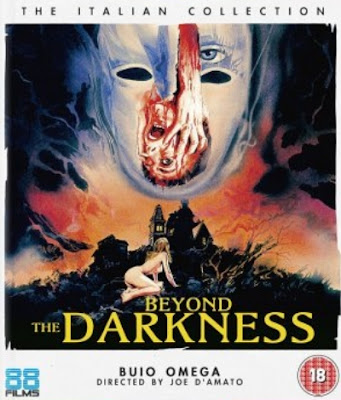 A taxidermist named Francesco (Kieran Canter) digs up his dead lover and brings her home.

Beyond the Darkness was Joe D'Amato's 1979 remake of I imagine a lot less sleazy Franco Nero picture called The Third Eye. It's a bit hard to nail down this movie in that I spent the first half wondering what the fuck was going on. I get Francesco is a weirdo and wants to Gein his girlfriend, but why bring all these random ladies back to his place for no other reason than to quench D'Amato's insatiable urge for boobs and bush. 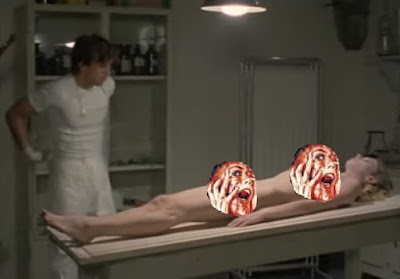 I believe that it had something to do with his housekeeper/milkmaid Iris (Franca Stoppi) - it's all very vague - as she seemed to pulling the strings based on the one voodoo ritual she performed after the opening credits. There's so little dialogue at the onset, I kind of had to infer a lot. Then, to be honest, the further it went along, the harder it was to stay conscious.

I do know one thing... THE SOUNDTRACK SLAPS! Provided by Goblin (credited here as The Goblins) it is definitely the best part of the movie. Unless you're into necrophilia...

Overall, I've seen better D'Amato and I've seen worse. I do have to say I think I made the rare mistake of watching the subtitled version over the dubbed. While I was on YT pulling the pictures/gifs I could see that the latter was much more of a hoot. Oh well, live and learn.