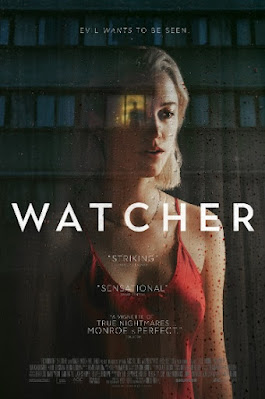 An American woman (Monroe) moves to Romania with her husband where she starts suspecting the man watching her from the building across the street may be a serial killer.

This movie was at first just one of many titles flooding my streaming service inbox, but after some positive feedback from some trusted sources I decided to give it a whirl one evening. I do love me some Maika after all, wish she was in more stuff.

While it is true that on the surface it looks like an obvious Rear Window clone, it also does have some more going for it. Instead of being confined to her apartment, Monroe's character Julia has a language barrier to deal with that feels far more debilitating and alienating. She's left out of conversations with her husband's co-workers and calling for help as she encounters danger becomes increasingly more difficult.

The backdrop of Bucharest was also a very pleasing one visually. It made the movie feel much more like a giallo to me than anything from Hitchcock. Monroe really gets to perform in this one, harkening back to when I first saw her 2013's It Follows where paranoia and dread rested heavily on her shoulders in every scene. Worth a “watch“.