This one I literally Googled eighties horrors that start with “O”. I recognized the coverbox and saw that Adrienne Barbeau was in it so that was good enough for me. 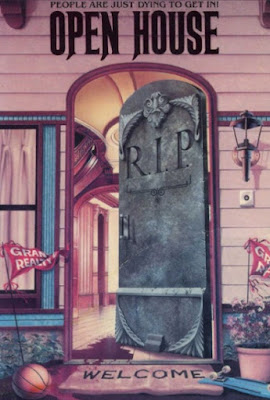 Adrienne... you let me astray! This movie was one of the most boring slashers I have ever watched. Like up (down) there with the extended cut of Boardinghouse.

So much of this movie is just needless exposition, scenes with the detective arguing with his boss, scenes shooting the shit at a radio station and so on. I could feign interest that its “eat the rich” rhetoric is as prescient now as it was then, but I just don't care that much tbh.

Perhaps more irksome than the pacing is the tone. It's all over the place. It opens up with a radio show caller blowing her head off after confessing she's being molested by her Dad and then goes into a campy scene where a realtor finds a dead body in the shower.

The kill scenes are over-the-top, a couple gets slashed with a plunger with razor blades in it, another realtor gets her boobs electrocuted, but their screams and distress are held onto for so long it borders on disturbing. Like the realtor who hangs in the upstairs window ala Black Christmas...

And it's not like there is a lot of gore, as much stuff happens off screen. I waited the entire movie for the rival dipshit realtor to get offed and it equated to a distant squelch as his head got lopped off with an axe. I'm going to assume I wasn't watching a cut version and say nuts to that. Gore would have made this way more palatable.

The generic score did not do Open House any favours, nor did the throwaway third act “the call is coming from inside the building” BS. I'm still wondering why they hid the killer's identity if it ended up being just some random goofball. Was I supposed to believe it was the rival realtor? Because they both liked to giggle incessantly.

Yeah, this was one of the weaker Alphabet Slops, definitely down there with G and H, but at least those had some effects. It did not surprise me to learn that Barbeau took this role to pay for her kid's tuition. A joyless role to be sure.