Let's get back to some first-time watches now. This one, with its weird Droste style cover art, I remembered from back in the video store days. 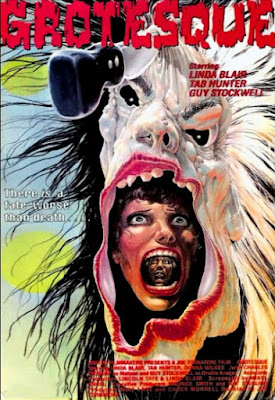 Lisa (Linda Blair) and her family are staying at their home in the mountains when they are set upon by a gang of punks looking for the money said to be stashed there.
Despite having Blair in it, Grotesque was one that always screamed El Cheapo to me so I never indulged. It was an instinct that was mostly correct. Blair and her shoulder pads drive up to her parent's cabin with her friend Katie (Donna “Angel” Wilkes) and run into of some stranded “punkers”. That's a term I'd never heard before and probably never will again.
Once they arrive at Lisa's parents, her father Kruger (get it??) goes about scaring Katie with his special effects gags (think retired age Corey Feldman from Friday 4) before they call it a night. You're probably thinking all that effects stuff is gonna come in handy later, but you'd be wrong. Pops is almost immediately beaten to death followed by every main character besides Blair, who spends the rest of the movie running through the snow.
Can we talk about how obnoxious these “punkers” are? The guy playing Scratch (Brad Wilson) seems to be doing his best(?) Police Academy Bobcat on meth impression, and Gibbs (Nels Van Patten) couldn't seem to finish any line of dialogue without shrilly cackling. Robert Z'Dar was present, but accounted for far too little. The whole lot of them were painful and couldn't be offed soon enough.

Then, with thirty minutes left to go in the picture, everybody was dead except two “punkers” with the ferral putty-face monster living in the walls set to take the blame. Then, the movie. Kept. On. GOING. Do you like unnecessarily long interrogation scenes? Superfluous revenge plots? Universal monster premiere crashers? Well then, this movie is for you. Seriously, it ended like three times, each one less satisfying than the last.
This movie is a dud and definitely the kind of trash that filled up space on video store shelves back in the day. At least now, with its movie in a movie in a movie conceit, I understand the meaning of the coverbox.
Posted by Jay Clarke at 8:00 AM