I imagine you were expecting the new Hellraiser today and that would have been my first choice, but alas it is not currently available in Canada for some strange reason. So, I went instead for Hellgate, which was the unwatched half of an Anchor Bay double-bill DVD with The Pit. 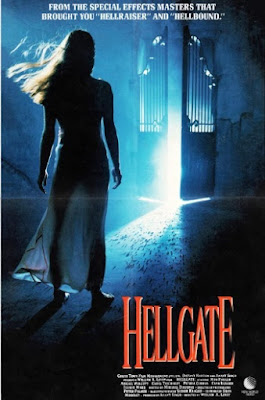 A group of friends get caught up in the legend of Hellgate, an abandoned mining town that lures strangers to their doom.

No way around this one, Hellgate a piece of shit. A boring piece of shit. I guess I should have been weary when the only thing that happened in the fifteen minutes was people talking fireside and cinema's lamest biker gang riding into town. Then Horshack (Ron Pailillo) shows up and does not add a single thing to it. He really should have quit while he was ahead in Friday 6.

You know you're dealing with a dud, when the Imdb cast list is just a bunch of empty placecards where headshots should be. Not even the blonde cutie femme fatale Josie (Abigial Woolcott) went further than this film. I guess the PTB were like, hey we already have a Kathleen Kinmount/Elizabeth Kaitan, sorry you're out of luck. I love that her father had an 80's glamour shot hung in his office even though it was a flashback set in the fifties(?). Good catch, set design guys. But to be fair, if the movie was more like that office scene, we all would have been better off.

I'm not kidding when I talk about how boring this movie is. It's a clock watcher of the highest order. There is just so much empty space and I couldn't help but be astonished every time I checked the time. It's bad movies like this that remind me of that classic Calvin & Hobbes cartoon.

Hellgate does blow most of its budget in the last ten minutes, but by that time who cares? Even when they do think of something cool - like decapitation by sign or when Josie gets shot-gunned out a window - they find the most uninteresting way to film it. This was director Will Levey second to last film so I guess even he knew it was time to hang it up. Unless, you have insomnia, avoid this one at all costs.