This was just a coverbox from my memory that just happened to be on YouTube. 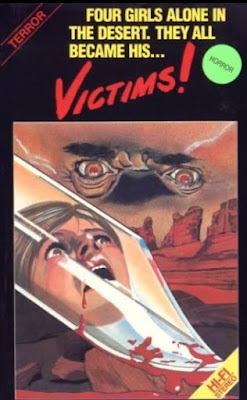 Four young women on a geology(!) field trip in the desert are stalked by a pair of sadistic bank robbers.

Whoa, this movie was something else. A woman takes an axe to the head in the first minute. Then, almost immediately another completely unrelated naked woman gets murdered in bed. THEN, a dude dressed as an old lady stabs a woman in the back in broad daylight. So trashy was the violence on display, it would have made H.G. Lewis blush.

It was at this point I was wondering if this entire film was just clips of murder scenarios. I mean, Victims! did little to dissuade me, as it took almost twenty minutes to offer up any kind of protagonists, or even actual dialogue. This was the opposite of yesterday's movie; almost no exposition. Scenes just kind of happened and sometimes didn't even finish before cutting to the next “scene”.

I cannot undersell how cheap this movie looked. Disregard that it was shot on 16mm, the threadbare story, awful sound - you can hear a lawnmower in the background during one scene - and again that editing should be enough to unhinge your jaw. I noticed on Imdb that director Jeff Hathcock also did 1986's Night Ripper and that makes so much fucking sense. And that movie is somehow a sizable step up from this.

You know, it always boggles my mind how they got actresses for these movies back in the day. Like, I can't imagine these were high paying (if at all) gigs so Hathcock somehow convinced four(!) women to go into the desert for two weeks to recreate a shittier version of I Spit on Your Grave. What a world...

Having said all that, for the next week I will definitely be asking every horror hound I know if they have seen this. Just for the tan lines alone. Now, THOSE were scary.