I'm gonna try a new experiment here for the month of October. It's called Alphabet Slop. A review a day for the remainder of the month going from A to Z.

I thought about doing that 31 days of Halloween thing, but they're so complicated. Hey, today watch a movie you saw when you were six, now watch a movie standing on one foot, now watch a movie that will make you piss yourself. So, yeah decided to keep it simple. It also gives me a chance to watch some random tapes & discs that have been sitting on my shelf for years. All twenty-six movies to come will either be first watches or at least ones I haven't seen in decades. Here we go... A is for Are You In the House Alone? 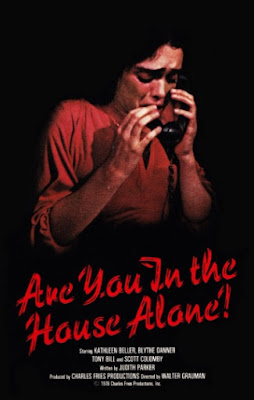 High schooler Gail (Kathleen Beller) is receiving threatening notes and phone calls, but by who?
The first thing that struck me, from the antagonist POV camera and Carpenter-esque musical sting was, man this guy loves Halloween, amirite? Then I realized this movie actually played on television a month before Halloween came out. In fact, if Imdb is to be believed Dennis Quaid was originally supposed to play Bob, but said no to do this film. Eep! Although I guess it worked out for him regardless.
So, what I should be saying is, man this guy loves Black Christmas, amirite? You throw in the fact that the antagonist keeps crank calling Gail, the influence becomes all the more glaring. But to be honest, this movie is all over the map, shifting back and forth between horror and straight up drama. It even turns into fucking Grease for a second.

The aftermath of Gail's rape is dealt with seriously and her parents talk at length about their own problems. Blythe Danner (who God damn looks like her daughter Gwyneth in this) is especially strong. The cast is actually quite stacked, with the aforementioned Quaid - who is pretty fucking lucky he didn't get typecast after this role - and Tony Bill who later went on become an accomplished director.
Sprinkled in are the horror tropes, Gail is receiving obscene phone calls asking if she is alone - Spoiler, she never is so the title is BS - and notes with questionable punctuation are being left in her locker. 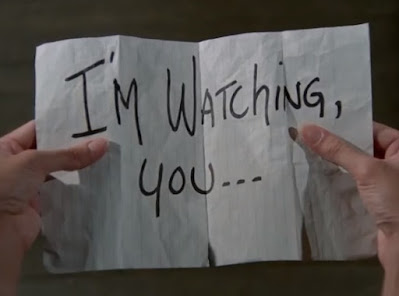 Red herrings abound, as her old boyfriend is a douche, her new one seems to have intermittent fits of jealousy and her photography teacher is all kinds of ick.

The oddest part of the movie is at the climax where it utilizes this giallo-style conceit where Gail sets up her camera take a picture every few seconds to catch who is leaving notes in someone's locker. Now, I'm not up on my seventies photo-tech, but wouldn't that require a shit-ton of film, like thousands of photos that would then have to be individually developed???
Are You In The House Alone? was half of a Shout Factory TV Terrors double bill disc with The Initiation of Sarah (which may or may not come up later) and I can't help but feel this was a weird pairing.  Even though it is a decent enough movie, I still feel a bit duped. I was expecting a movie of the week version of When A Stranger Calls, but instead got a glorified after school special about how the system fails rape victims. Fun times.
Posted by Jay Clarke at 10:00 AM