This one was a blind buy at yet another Rue Morgue flea market. I'd never heard of it, but it has Donald Pleasance in it so that was enough for me to shell out five bucks. 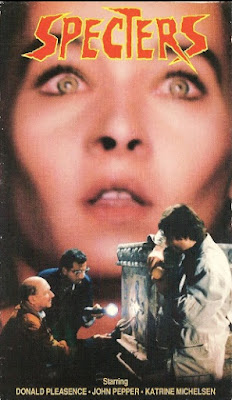 Drilling near an archeological dig site in Rome unleashes an ancient demon.

Specters was pretty straightforward stuff, and yet incoherent at the same time. The Italians can usually be counted on to spice up said confusion so you can at least rejoice in the din, but director Marcello Avallone falls short of the mark. This movie had four(!) screenwriters and it shows, as there are more than one subplots that struggle to take center stage. Is this movie about a pissed off demon? Is it about duelling archeologists? Is it about an actress/singer's failing career?

It is amusing to watch Donald Pleasance half-ass his way though the few days (if that) he was on set. To be fair though, even Pleasance at fifty-percent makes a movie one-hundred percent better. Was there ever anyone who could describe evil better than Sir Donald?

Despite its shortcomings, there were some bright spots. The score by Lele Marchitelli & Danilo Rea slaps and regular Argento collaborator Sergio Stivaletti is on hand for the gore effects, even if it is mostly just demon claws coming into frame to rip off people's flesh.

Not much more to say about this one. It's no The Keep that's for sure. Onto the next!