Let me introduce you to ‘the pile’. 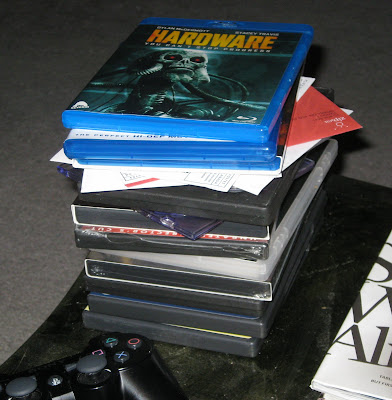 It exists on my coffee table. It’s where I stack my movies-to-watch. This ever-shifting mess of loaners, freebies, screeners and Zip.ca envelopes sits there mocking me every time I sit down on my couch. Until now. I’ve decided I’m going to make an concerted effort to chip away at it. First up, is Michael J. Bassett’s 2006 film Wilderness.

Now, I had originally planned to watch this before the Toronto Film Fest because Bassett’s newest film Solomon Kane was premiering there. Though I had seen his debut Deathwatch several years ago, I wanted to reacquaint myself with his style. Obviously, I didn’t get around to it. After seeing Kane – which as far as swashbuckling sword & sorcery movies go was a fairly entertaining effort – the completist in me felt obligated to take in Wilderness, if only to get my Zip queue moving again. 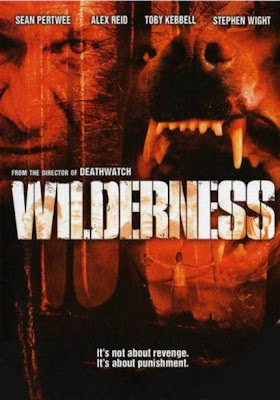 A group of incarcerated juvenile delinquents and their handlers are set upon by a maniacal survivalist, while on an island character-building excursion.

Wilderness is definitely my favourite of the three projects Bassett has made so far. There’s a lot to like about this movie. The setup is simple and things get moving quickly. The cast is great and stacked with recognizable British talent. Sean Pertwee, who always elevates the quality of anything he’s in and Alex Reid (The Descent) appear as the authority figures and Toby Kebbell – who I first saw in the fantastic Shane Meadows film Dead Man’s Shoes – excels here as the alpha male juvenile Callum. What put this movie over the top for me were the interesting dynamics. In addition to the perils of having a trained killer and his attack dogs (which are a force by themselves) on their tail, these kids also have deal with each other. With their supervising element removed, some of these delinquents are as dangerous as the person hunting them and things fall into chaos quickly. It is unsettling and not beyond the realm of possibility. I mean there’s still a helping of characters doing stuff they clearly shouldn’t like when Jo (Karly Greene) unnecessarily provokes her own undoing, but for the most part the script is fairly tight. 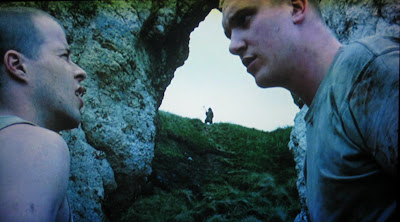 Pertwee put it best in the accompanying featurette, when he described Wilderness as a cross between Battle Royale and Lord Of The Flies. That’s some nice fucking company! Wilderness is also similar thematically to a lesser-known Canadian film from the seventies called Rituals. Unlike Kane and Deathwatch, Wilderness is devoid of of any supernatural elements, which maybe why it resonated with me more. There is also some well placed gore in this movie. It is rarely excessive and is used only to accentuate the brutality of the circumstances.

After watching Wilderness, Bassett has cemented himself in my eyes as a competent filmmaker. As I said, Solomon Kane was decent enough, but it’s the kind of thing that could become a franchise if it does well enough and I'd hate to see him get locked into one thing for an extended period of time. I find his ensemble character pieces like Wilderness – and Deathwatch to a lesser extent – much more appealing, so that’s where I hope his career leads him.
Posted by Jay Clarke at 12:37 PM

Wow, that sounds awesome I might have to check that sucker out. And gratz on taking a stab at 'the pile'. You can do it!