Hello all. Hope everyone is having a good weekend. Here's the latest batch of items from this week.

A piece of music that has always stayed with me since childhood, is Jonathan Elias' score for the Stephen King movie adaptation of Children Of The Corn. It was why I was instantly reminded of it, when Mark Morton of Examiner.com emailed me a link to a recent interview with Elias. In it, Morton asks him about working on the score for the recent television remake.

Morton: How was it to go back to the well to revisit the music? Did you want to start fresh or just freshen up what you had previously done?

Elias: I was hired with the understanding that they wanted to freshen it up – to use the old themes but in a fresh light. The producer/director Donald [Borchers] is an old friend of mine. He was actually the producer of the first one. So it was understood what I was walking in to. And part of the fun was that I got to have my daughter involved, singing on the score. She is one of the Children of the Corn choir singers.

The Argento staple Suspiria played the Alamo Ritz last Sunday, and renowned artist Alan Forbes created an original 18 x 24" for the occasion. Check it out below. Only 115 were printed, so if this strikes your fancy, start searching now. 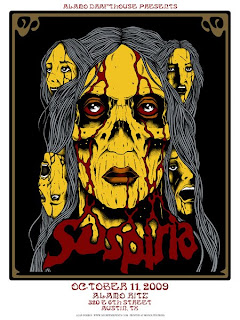 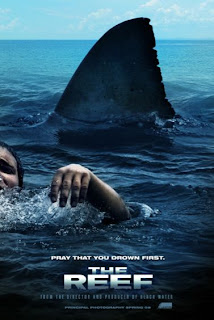 If there is anything on this planet that immediately puts fear into my heart, it is sharks. Watching the film Open Water in 2004 was one of my most terrifying experiences in a theatre. Well, it looks director Andrew Traucki of the 2007 killer croc flick Black Water is back with a similar venture entitled The Reef. Oh boy, why do people go out there when they KNOW there are these death machines just lying in wait? Don't get me wrong, I have nothing against sharks. I find them incredibly fascinating, but I'm quite content to let them have the oceans. Anyone who wants to go out there, you're on your own. Anyhoo, for more info on The Reef, go to the website, here.
Posted by Jay Clarke at 11:25 AM