I'll be serving up a bunch of Halloween posts this week, the first of which is this selection of recommended Blu-ray horrors, in case you decide to stay in this Hallow's Eve. Now, there are obviously a shit-ton of titles to choose from, but here are five I picked out for you today. 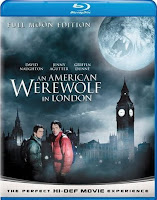 First up, is the quintessential horror film An American Werewolf In London. It just released on Blu-ray last month and it looks fantastic. All the special features from the Collector's Edition DVD have thankfully been carried over, along with a few other goodies. A few years ago, a young British cinephile named Paul Davis sought to film a short about the making of American Werewolf. When he managed to get director John Landis on board, the project ballooned and before Davis knew it, he had almost everyone involved with the 1981 film sharing their memories. Beware The Moon – now a full-fledged documentary – is included on this disc and worth the price tag alone. There is also an additional featurette with legendary special effects guru Rick Baker. The melding of comedy and horror has still never been as adeptly done as it was in this film. 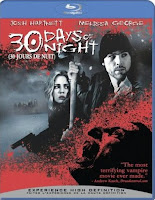 Next, is David Slade's 2007 adaptation of the Stephen Niles comic 30 Days Of Night. What I love about this film is that – amongst all this Twilight nonsense – it gives the vampire its teeth back. And let's please ignore that Slade is directing the third entry in that series in 2010, shall we? Niles' vamps are ferral, unforgiving beasts who see humans as livestock and nothing more. 30 Days Of Night is one of the best comic-to-movie adaptations to date and the Blu-ray transfer is superb. The unique art of Ben Templesmith is captured beautifully and the gory bits are all left intact. For my original Blu-ray review, click here. 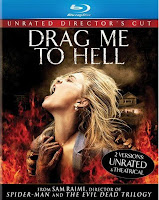 Sam Raimi's triumphant return to horror Drag Me To Hell hit store shelves a few weeks ago. Seeing this last May was one of the most enjoyable experiences I've had in a theatre for quite some time and none of this has been lost in its journey to Blu-ray. You could tell that Sam's first and perhaps only rule on this picture, was to have fun and it shows. Every scare set piece pays off gloriously, with a jump and a laugh. This is the closest we are going to get to another Evil Dead, so enjoy it! 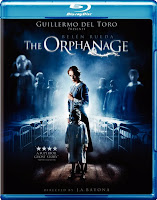 My next pick is probably the best horror transfer I have seen yet. It is J.A. Bayona's The Orphanage. You can read my original Blu-ray review here, but this movie is spectacular in every regard and seeing it in Hi-Def just takes it to another level. I have shown this movie to countless people and the verdict is unanimous (well, almost unanimous, I do have one friend who inexplicably doesn't like this film – you know who you are!) I adore this movie and no matter how many times I watch it, there are still moments that make me hold my breath. 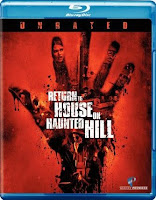 My last choice on the list isn't a particularly good movie, but I want to include it because of the unique experience that the Blu-ray disc offers. The movie is 2007's Return To House On Haunted Hill. It has a Choose Your Own Adventure feature, where at several points it will stop a give you a choice, like “Should Paul Run Away?” You select the outcome with your remote and the movie continues based on what you decided. It's quite a novel feature and I'm actually surprised I haven't seen any titles do it since. There are apparently ninety-some-odd scenarios, so I'm sure it could keep you and yours occupied for an evening. This disc was the first Blu-ray – actually one of the first movies period – I reviewed here at THS. Click here and here to read my before and after thoughts.

So, there you go. If you are part of the Hi-Def initiated, plop in one of these along with your usual late October viewings. From one couch to another, I salute you!
Posted by Jay Clarke at 10:16 AM

Heck yes to The Orphanage! I am about to watch it for about the 5th time tonight. I too have been turning people on to it; amazing film!