Slaughter High is one of those titles that slipped through the cracks when I was devouring horror movies in the eighties. It's actually surprising I'd never seen it, considering that slashers were my bread and butter back then. When Final Girl announced it was October's Film Club selection, it seemed like the perfect time to fill in that blank. 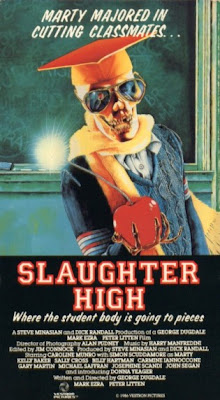 Many years after science geek Marty Rantzen (Simon Scuddamore) was maimed in a April Fools prank gone wrong, his tormentors are called back to their old high school for a reunion. Only, Marty is there waiting for them and looking for revenge.

Holy shit, where do I start with this movie? It can't possibly be taken seriously, but it's not full on camp like what you would get from, say Troma. Slaughter High is just one of those movies that you have to laugh at and hope the filmmakers were in on the joke. I think at some point, they must have just decided to throw reality out the window. I mean, the setup is absurd. Carol (Caroline Munro) is supposed to be Marty's classmate, but looks old enough to be his teacher. 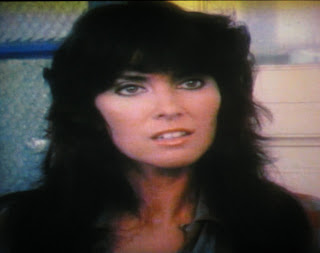 I failed a grade. Or twenty.

After all the tragic shenanigans, when they come back to the school for their reunion, they of course all look exactly the same. Slaughter High does have some creative kills, even if they are at times implausible. The character's actions are also hilarious. Two characters decide to knock boots in a conveniently placed bed and another decides to wash off her friend's blood by going off by herself, stripping naked and soaking in a disused bathtub. This is just after a few of their number have been brutally murdered before their eyes, I might add. 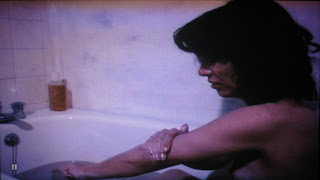 So, every slasher must have a costume, right? Well, Marty's is a court jester mask that has bells that jingle loudly. But, only when it's convenient, like when he's not sneaking up on someone. Or is it just when the foley forgot to add in the sound effect? Speaking of sound, they did manage to snag Harry Manfredini, but the score sounds like stuff swept up from Friday The 13th's cutting room floor. And the sound cues might just be lifted straight from said series. It seems like something he may have done on a Sunday afternoon after losing a bet the night before. 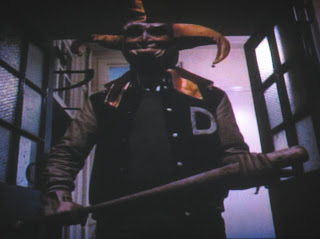 They were out of hockey masks.

On the other hand, I did get to hear someone use the phrase “the pits”. That took me back. That along with the killer beer, acid baths and open drainage pits, but maybe I've said too much about my misspent youth. I digress. It is cool that it ends during daylight hours, but perplexes when the remaining heads think that they'll be safe past noon because that's when April Fools Day ends. That's a new one. Try that time limit bullshit on Jason or Michael and see how well that ends for you.

You can sort of pinpoint where Slaughter High lies on the scale of slashers. It is right in the group that came AFTER the ones that were cashing in on Friday The 13th, which itself was cashing in on Halloween. Basically, what I'm saying is it's low on the totem pole and it shows. It's a copy of a copy of a copy. However, try not to take it too seriously – and why would you really? - and it is at least a watchable curiosity.
Posted by Jay Clarke at 7:15 AM

It's awesome that someone saying "the pits" is a high point of the experience for you! :D

The open drain pit "death?" confused me. When the chick fell back in and Marty left I thought to myself (and possibly said out loud) "Um..now you can try again and get out!" The movie is endless amounts of awesome when it comes to things like that.

Yeah, the best thing Stacie pointed out was the tractor though. What kind of a getaway vehicle is that???