When I first saw the Zombieland trailer, I remember thinking that it could be fun. My friend Schwartz was a little more skeptical,

“You know what this looks like?” he said. “Studio suits, sitting around a table and saying, okay what's hot right now? Zombies? All right, let's throw some money at a star and get something flashy out, pronto.”

And yes, I can see that. I could figure that out just from the massive advertising blitz that Zombieland has received. I mean, my twelve-year-old niece wants to see this thing for God's sake. 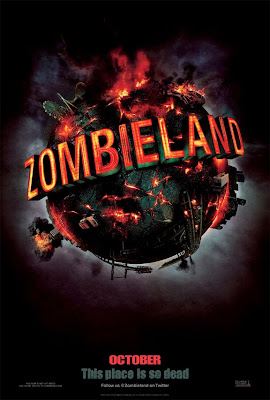 Soft spoken wimp Columbus (Jesse Eisenberg) and bad ass zombie killer Tallahassee (Woody Harrelson) are travelling east after a zombie apocalypse and meet up with Wichita (Emma Stone) and Little Rock (Abigail Breslin), who are on their way to a theme park that is rumoured to be free of the undead.

Zombieland is a lot of fun. It doesn't try to reinvent the wheel, it just gives you the standard post-modern zombie apocalypse scenario and plunks down some colourful characters in it for you to enjoy. The gore is fairly cartoony and employs a lot of CG – some of it not so great – but I can forgive that considering the practical effects are fairly decent. The cast here is perfect, especially Harrelson who looks like he was having a blast every minute of this shoot. It certainly sounds like Zombieland had an effect on him. I know that a lot of socially awkward guys will see some of themselves in the Eisenberg's character, as well. Stone & Breslin mesh well with their male counterparts, making for some good comedy. Which brings me to the dialogue. A lot of it is quite funny and really feels true. If we were suddenly cut off from all our everyday conveniences, would we often reminisce about them? I think we would. There were moments where Zombieland did look like it was trying a little too hard though. The device of the pop-up graphics became a little overdone by the fifteen-minute mark, so it was good they held back on them after that point. I will say that the credit sequence featuring slow-mo zombie attacks to the tune of Metallica's “For Whom The Bell Tolls” was pretty awesome.

The voice over does seem like a contrivance, but I think it works here for the most part. The half survival guide, half boy trying to find love narrative of Columbus almost comes off as charming. This could be because I fall into the group of people that I think this movie is speaking to. You know, the kind sitting at their desk at ten-thirty on a Monday morning almost wishing for a zombie plague, if only to break up the monotony. Zombieland is another in a growing trend of genre movies that have a running time at eighty to ninety minutes. I applaud that. I'm not saying that three-hour movies aren't fine – Inglourious Basterds will likely end up being my top film of 2009 – but there's something to be said for movies that get in, do their thing and get out.

Even though it shares some of the same elements as Shaun Of The Dead – which seems to be the knee jerk comparison – I don't feel that Zombieland will become as relevant as that Brit zom-rom-com still remains. So, in the end Schwartz was right. Zombieland is empty popcorn entertainment, but that doesn't stop it from being one hell of a good time.

Good review, and pretty close to mine (albeit in your own, inimitable style) in content. Fun and shallow, but nothing wrong with that once in a while. And it will convert many, many people to zombiephiles and there is NOTHING wrong with that.

Just got home from seeing it too. I agree with most of what you said. It's ultimately shallow in terms of thematic elements but that's not what it's going for. It was a ton of fun to watch and Harralson couldn't have been better. It get's my nod of approval.