Another Trip To The Palace.

I took another trip to Trash Palace last Friday night, this time for an old Canadian ditty called The Little Girl Who Lives Down The Lane, which was another gem out of J.C.'s collection. Since it had been over twenty years since I saw it last, I figured it was worth a revisit. 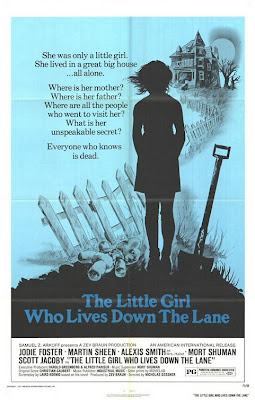 Rynn (Jodie Foster) is an intelligent thirteen-year-old in lives in an old and secluded house. She says she lives with her father, yet no one in town has ever seen him. When the landlord comes snooping, Rynn goes to extreme lengths to keep her secret hidden.

Little Girl is a great little movie of a sort that are rarely made anymore. It is a tightly knit thriller that is basically just a sequence of dialogues between Rynn and those who attempt to invade the sanctuary she has built for herself. So much time has passed, it is sometimes easy to forget how young Foster was when she started acting. 1976 was a big year for her as she appeared in three other notable releases, the family films Freaky Friday and Bugsy Malone and Marty Scorsese's Taxi Driver - the film that cemented her status as one to watch. In Little Girl, Foster is front and center and delivers an admirable performance with an eloquence far beyond her years. And she is not the only fine performer here. Martin Sheen oozes sleaze as pervert Frank Hallet, who endlessly tries to get some alone time with Rynn. Also appearing as Rynn's love interest – yes, you read that right – Mario, is Scott Jacoby, who had coincidentally played a similar role to Foster's two years before in a lesser TV movie called Bad Ronald. The few exchanges between Rynn and her landlord Mrs. Hallet (Alexis Smith) are also deliciously venomous. It really is true that North American films seemed to get away with a lot more in the seventies. There are elements to this film that just wouldn't fly these days, like the sex scene – tame as it may be – between Mario and Rynn, and the more creepy advances by Frank upon Rynn. 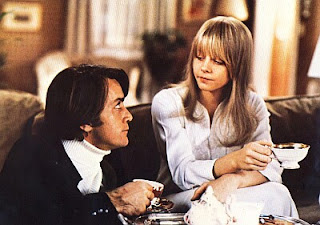 The Little Girl Who Lives Down The Lane is a solid little film. It may not be as extreme or genre specific as some of the other Canadian horrors of that time period, like Black Christmas, The Changeling and Cronenberg's early work, but it is certainly no less engaging. If you can find this on DVD, I suggest you give it a whirl.
Posted by Jay Clarke at 10:15 AM

Turns out I have seen this movie!! I watched it for an essay I wrote in a Canadian Film Theory class.