Blood River is the newest film by the diabolical duo of Adam Mason and Simon Boyes. I missed it at this year’s Fantasia Festival and was glad to recently get my hands on a screener. 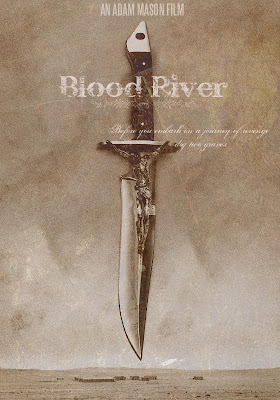 After Clark (Ian Duncan) & Summer (Tess Panzer) find themselves stranded while driving across the Nevadan desert, they meet up with a drifter named Joseph (Andrew Howard) who is quick to offer help, but may have other motives in mind.

First off, Blood River looks fantastic. This is Mason’s most visually ambitious film to date. With his previous efforts confined to small areas, River is the complete antithesis of that. It actually reminded me a lot of Richard Stanley’s 1992 film Dust Devil, although this is a tad more coherent than that was. I’m always impressed with films that can hold my interest when only using a few characters. It takes a special kind of writer (or in this case, writers) to do that. What I found even more intriguing was the shifts in control between Clark, Summer and Joseph. It gave the movie a lot more depth than I was initially expecting. The performance of Andrew Howard is really the strength of River though. We glimpsed his range in 2006’s The Devil’s Chair, but here he is completely set free. He has an ability to go from helpful stranger to frothing mad dog at the drop of a beat-up old cowboy hat. 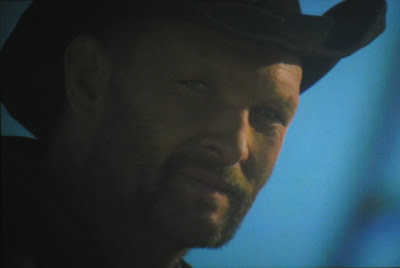 Do not fuck with this man.

The only real criticism I can offer is that Summer was a bit too trusting for a good deal longer than she should have been, but that’s a minor qualm. I also wasn’t crazy about the ending at first, though I think it’s growing on me. If it had been spelled out, it might not have stuck with me for as long as it did.

Blood River is yet another title in this current swing of pitch black films from the British. For a while, it seemed our English imports – like Shaun Of The Dead, Severance & Evil Aliens – were heavy on the comedy. However, coming on their heels are unabashedly extreme outings like The Descent, Eden Lake & The Children. I wonder what the cause of this is? Could it be indicative of the climate in the UK, or perhaps the nasty attitudes of French horror cinema have made their way across the Channel? Though I guess that should have no bearing on Mason & Boyes as they are now living in the States and frankly, have always been maniacs. If you’ve seen their previous works, you know they don’t fuck around. While it is true that The Devil’s Chair had some dark comedy in it, it was only to butter you up for when they hit you with the last act.

Blood River might not be for some with its slow pace and somewhat ambiguous nature, but I think this is definitely their strongest effort yet. If you listen to Mason & Boyes’ podcast on Twitch, you know how many irons they have in the fire right now and I’m looking forward to each and every one of them.
Posted by Jay Clarke at 10:10 AM

I had never heard of these guys but I'll definitely check out this movie and their other stuff if I can get my hands on it.