Dave Parker’s new film The Hills Run Red recently dropped on DVD after a successful festival run and is the subject of this installment of On The Shelf. 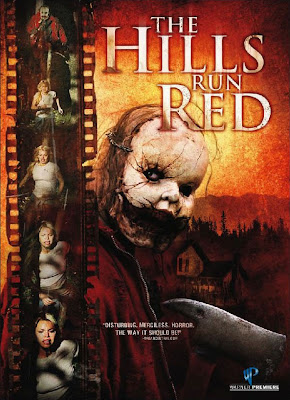 A small film crew head into the Virginian backwoods to film a documentary about a lost horror film called The Hills Run Red. Fantasy quickly turns into reality when they run across Babyface, the brutal killer of the film in question.

Now, I knew going in that The Hills Run Red was by the guys behind 2000’s The Dead Hate The Living, so I was expecting a large helping of self-reference. And while this is a great deal more skillful than his previous effort, there’s still a lot of eye rolling to be had. There was so much potential here and at times, it was fresh and unique. Unfortunately, for every clever subversion, there was something absurd. The opening credits were engaging enough, recalling the cringe-inducing scene from Doug Buck’s short Cutting Moments. I also really liked the look the hulking killer Babyface with his doll facemask and bright red coat. 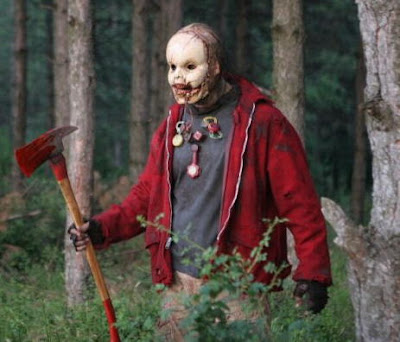 Fans of actress Sophie Monk will be glad to hear that we see a LOT of her in this movie and Bill Sadler shows up as the reclusive auteur behind the lost film, basically chews up every scene he’s in. The Hills Run Red runs out of steam in its third act though, falling into a ridiculousness that I just couldn’t abide as a viewer. I thought the ending was also literally laughable, well the pre-credits finale anyway, as the end-end was a trifle more disturbing. The setup is a lot like the excellent Carpenter Masters Of Horror episode Cigarette Burns. Both stories involve searching for a lost film that has become legend for the effect it had on its small number of people who saw it. This is the part that really resonates with me as an esoteric film fan. With modern technology having everything at your fingertips, the thrill of the hunt is all but gone. There was nothing like tracking down hard-to-find VHS titles like Cannibal Holocaust or Microwave Massacre back in the golden age of home video. Every horror fan of that era had a The Hills Run Red/Le Fin Absolue du Monde equivalent they were endlessly seeking out.

You know what I think my problem with The Hills Run Red was? Instead of all this film-about-a-film meandering, I wish that Parker had gone the House Of The Devil route and just MADE the lost seventies horror flick in the movie, as the trailer and the bits that you see were when I was most interested.

As far as slashers go, you could do a lot worse, but just be aware that this movie swings back and forth from good to not-so-good like a metronome set to Presto.
Posted by Jay Clarke at 1:12 PM

May check this out sometime, but if the film within the film really is more interesting than the bulk then I'm in no rush.

I had no idea it was directed by Dave Parker! I loved THE DEAD HATE THE LIVING - the first DVD I ever bought!! It has a special place in my heart.

Definitely putting this at the top of the watch pile...watching on Thursday.