Bump In The Night.

A movie that has been in the pipeline for a long time is Paranormal Activity. It made a splash at last year's Slamdance and then lay dormant for a while. Then, after a successful couple of screenings last month, its hype machine began chugging vigorously. There was such an apparent demand for this movie that Paramount said that if it got one million online votes, they would give Paranormal Activity a wide release. Well...

This is quite an unprecedented occurrence. I'm not sure how I feel about this as common practice, but the fact remains that this movie got released where it may not have otherwise. Perhaps we would have been seen other deserved titles in theatres like Trick 'r Treat and All The Boys Love Mandy Lane, if similar practices had been employed. 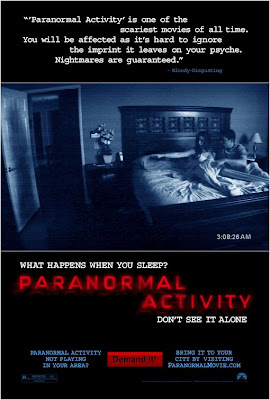 When Katie (Katie Featherston) insists that she is being haunted, her boyfriend Micah (Micah Sloat) sets up a camera in their house to capture any unexplained phenomenon.

So, all the hype aside, is Paranormal Activity the fear fest that the ads imply? For the most part, I would say yes. There is a lot of creepy shit in this movie, some of which is quite original. The movie finds a really clever way to subvert the usual haunted house movie query 'Why don't you just leave?' Easy comparisons can be made to this and The Blair Witch Project, as they share several things in common. The production is minuscule, the cinema verité style is the same and both involve a series of encounters over a period of time. They both have an impending sense of dread throughout and have the progression of each night that approaches, you know things are going to get worse. As a film, Paranormal Activity is very rudimentary. It does not have the intricacies of a Blair Witch myth to forward the story, so what you are dealing with is basically the skeleton of a plot in between the scare set pieces. It is filmmaking in its most basic form and I think it works because the performances are genuine. The two leads are fairly green and considering a good deal of the material was likely improvised, I thought they did a fine job. It didn't feel like the movie had a lot of filler, but I looked up the running time and was amazed to see it was ninety-nine minutes.

Obviously, Paranormal Activity is the type of movie that is going to hit everyone in a different way. There were people in the theatre that sounded like they were going to have a heart attack, and then there were the jackasses that couldn't help but throw out sarcastic comments. I think the only glaring negative for me was the ending. It's pretty hokey and not a good way to finish the experience. Coming up with a decent conclusion after so much build-up is a tall task I know, but someone must have spit balled an better idea than what ended up onscreen. Lastly, I have a question out there for the ladies. When would it be kosher for the guy to bolt in that relationship? I can understand him wanting to be the protector and take care of business, but when do you eventually say, 'Eff it, there are plenty of other chicks out there that don't live with otherworldly beings'?

Fans of the Blair Witch Project should definitely seek this one out because – though not as complete a tale – it hits a lot of the same notes. It has an everyman accessibility that is sure to have you at least hesitating to turn out the lights out at bedtime.
Posted by Jay Clarke at 10:28 AM

I think you should direct your question more towards other guys instead of us women. To me it would just depend on the guy. Some try to stick it out through problems, while there are others that bolt at the first sign of trouble.

Speaking for myself, if it were happening to my boyfriend, I would be scared but also very curious. I like this type of stuff, so I think that would keep me around.

Also, there was a different ending than the one was get to see. From what I have been reading, there was actually two other different endings. If you want, follow the link from my blog to The Horror Effect. Becky talks about the differences she noticed that Paramount made from the version she watched. It is pretty interesting.

I saw this yesterday and was pretty impressed. It actually scared me. Though, like you, my theater had a huge share of jackasses. Parents who brought their 7-year-olds, sarcastic comment guy, women attempting to communicate with the characters onscreen - you name it, they were there. It actually reaffirmed for me why I can't stand a lot of people.

That aside, this was a great film. I read The Horror Effect's writeup about the alternate endings and I'm still not convinced that we ended up with the worst one. I actually enjoyed it.

Let's clarify here--are we talking about "the ending" as in the way the story was resolved? Because that I was fine with, and the alt endings I've read about seem way too busy. My problem is with the final beat, the last one to two seconds. I found it insulting, bordering on betrayal. On the bright side, I actually slept when I got home, which I might not have managed if they'd stuck the landing.


Pretty sure this is the first time a filmmaker has paid homage to both Cloverfield and the eagle from The Colbert Report.

Cool, thanks Heather I'll check that out.

Yes Gil, I was referring to the last few seconds.

I don't know if the alternate endings were best Matt, but I got the feeling that they possibly fit in with the film with what we watched. I could be wrong. After all, I am just going by what Becky wrote about it. Without actually seeing it for myself, I can't say for sure if it would have been better.